I’ve archived the September 2016 Water Level Chart (at left). The most notable feature of the September chart, like last month was the slow but steady fall of the water level as the result of the ongoing drought. Last month the lake fell 3.6″ for the month at an average rate of 0.12″ per day, due entirely to evaporation. With the weather having cooled a bit, the lake fell only 2.88″ in September at an average rate of not quite 0.10″ per day, again due entirely to evaporation. Any slight rise in the water level resulting from the limited rainfall we received was quickly wicked away into the surrounding shoreline. At nearly -70″ below the top of the dam, you have never seen the lake this low. 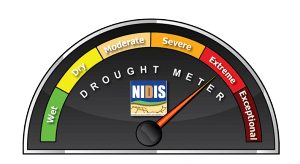 Rainfall: We received only 1.46″ of rain in September, 2.28″ less than the average amount of rainfall for September of 3.74″ and with only 23.91″ of rain to date, we’re now over 4.6″ short for the year. This may not sound like much of a shortfall but it is HUGE: according to the National Integrated Drought Information System, Whitefield (04353) has been upgraded to EXTREME drought conditions. The last time I checked (about a week ago) we were still listed as SEVERE. Jefferson (04348) is still listed as SEVERE but is probably not far behind.

Those of you around Clary Lake with dry wells can blame it on the lack of rain, but the extreme low water level of Clary Lake is actually a contributing factor to the low water table. The lowered lake basin acts as a sink, literally draining water out of the surrounding ground thereby depresssing/lowering the water table. This effect can extend for quite a distance from the lake.