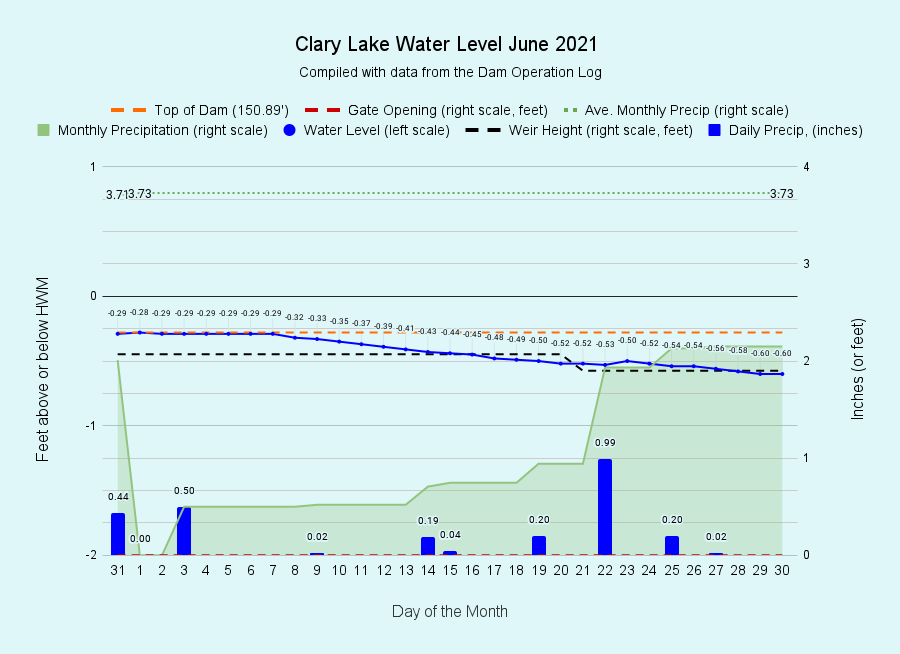 I have archived the June 2021 Water Level Chart (at left). The drought deepens. We were shy 5.20 inches of rainfall at the end of May, now we’re shy 6.76 inches of rainfall at  the end of June. We received a total of only 2.15 inches of rain in June, fully 1.58 inches less than normal. This brings us to 14.1 inches for the year to date. Our drought is nowhere near as severe as they’re experiencing in the western half of our country and especially in the southwest, but that is small consolation: this deficit will have a profound impact on our environment and ground water supplies for the rest of the year, and it’s not over. It’s so dry that even when we received a significant rainfall of 0.99 inches on the 22nd of June, the lake level only came up 1/3 of an inch. Lesser rainfall amounts during the month had almost no measurable effect on the lake level. There are two reasons for this: The primary explanation is that the ground around the lake is so dry that when the lake receives rain, the rising water is quickly wicked off into the surrounding dry shoreline. The other reason is that at this lake elevation, adding more water to the lake mostly makes the lake bigger, not deeper.

We received 0.44 inches of rainfall on the last day of May and 0.50 inches on the 3rd of June and this precipitation served to keep the lake level stable at -0.29 feet below the High Water Mark for the first 7 days of the month. For the rest of the month the lake level dropped gradually but steadily. We started the month at -0.29 feet below the HWM and ended the month at -0.60 feet, having lost only 0.31 feet of water. Leakage is estimated to be only about 2 cubic feet per second so most of the water loss during the month can be attributed to evaporation. Only by keeping the dam’s gate and weir fully closed were we able to maintain the lake level as high as it is.

While much of the State received rain storms on the last day of June with many passing just north of Whitefield & Jefferson, none of it fell on Clary Lake. We didn’t need damaging thunderstorms, but a little rain would have been nice! However, it looks like we’re slated to receive tonight and tomorrow. Here’s hoping.