I have archived the January 2019 Water Level Chart (at left). The best thing about this chart is that it shows that for the first time in over 8 years, the lake level was right where was supposed to be, when it was supposed to be there. The lake level remained above -24″ below the HWM for the entire month. How sweet is that! For the first 3/4 of the month, the lake level hovered right around 18″ below the HWM, give or take a few inches. Then we received 1.66″ of rain on the 24th which caused the lake to rise almost 1 foot, topping out at about 5″ below the HWM. That was higher higher than we’ve seen the lake in over 8 years, and actually than we wanted to see it so we opened the gate a foot to release more water in addition to what was already going over the weir. That halted the lake level rise. Since then it’s been falling gradually, ending the month not quite 10″ below the HWM. Welcome to the new normal!

We received 3.20″ of precipitation in January, 0.6″ more than the 2.6″ average for January. We also ended 2018 just a little above average as well, so our ground water supply is in pretty good shape right now. It remains to be seen if we build up a snow pack this winter. So far every snow fall has been followed by rain which knocks down the snow depth to next to nothing. Hopefully February will bring some snow that lasts a while.

This time of year our goal is to maintain the lake level somewhere between 12″ and at the most 24″ below the HWM. We’ll start installing stop logs in the weir and raising the lake level in early March. By the time the ice goes out we expect to have the lake level up at or very near the HWM. We’ll try and keep it more or less at that level through the spring and summer.

Some of you have noticed a link at the top of the sidebar to the Clary Dam Operation Log. I’d like to take this opportunity to briefly introduce it. The Clary Lake Water Level Order (WLO) requires the dam owner prepare a Water Level Management Plan (WLMP) which includes a requirement that we keep a log of water levels, and gate and weir status. We’ve been working on our WLMP for a while but have already implemented the log as a publicly accessible Google Spreadsheet which we’re calling the Clary Dam Operation Log. We started recording data back on December 27th and with a few exceptions have been logging data almost daily ever since. While we’re not required to and don’t plan to continue recording data quite that often, we’re still learning how to operate the dam and for the time being at least we will be logging data more often than required. The following chart of Clary Dam Flow Statistics for January 2019 graphically illustrates what we’ve done with some the data we’ve recorded so far: 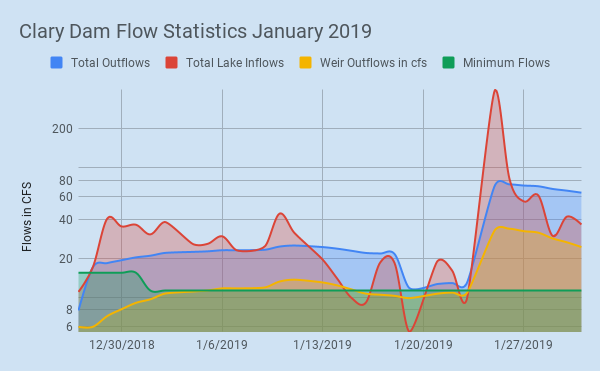 I’ve been recording lake level data for years now, but it has always been from the point of view of a bystander, passively logging rainfall and lake level changes without having any access to or control over what was happening on the outlet end of things. It wasn’t until we took control of the property last Fall that I’ve had free and unfettered access to the dam and have been able to start to quantify and (more importantly) control the outflows. I’m loving it. While operating the dam isn’t rocket science, there is still a lot to it. We are after all subject to a DEP Water Level Order which specifies a water level regime and a minimum flows requirement for Clary Lake that we are required to comply with. This is a responsibility we take seriously, and one we are fully capable of meeting.