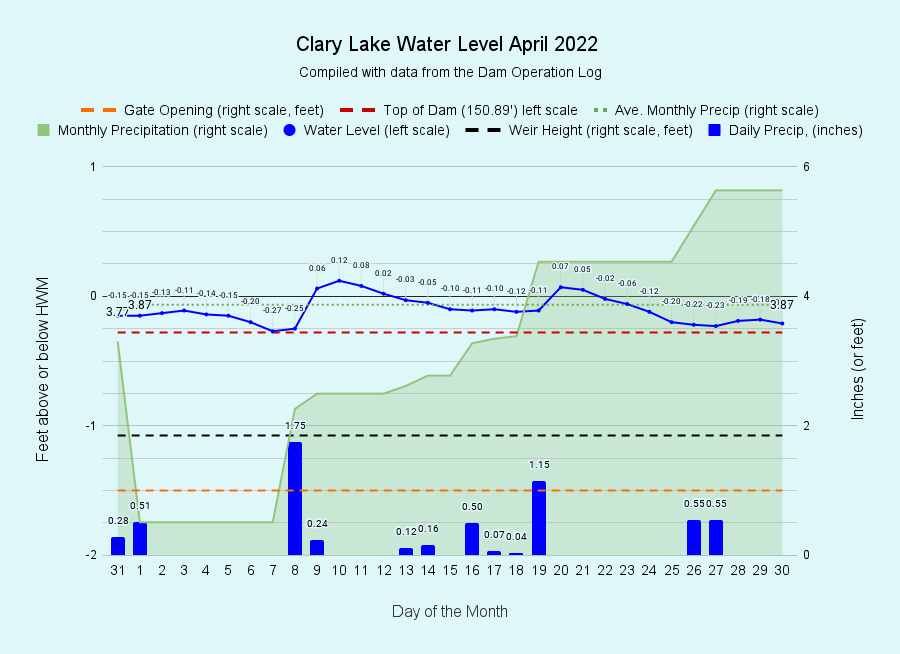 I have archived the April 2022 Water Level Chart (at left). April has been a very cold, very wet, and very windy month! The above-average precipitation with which we started the year has continued through April in a big way: we received fully 5.64 inches of rain in April or 1.77 inches more than the normal rainfall of 3.87 inches, fully 3.78 inches beyond where we would normally be on this date. We have received literally 5 months of precipitation in only 4. Impressive.

Not surprisingly, the lake level remained high for the month, staying somewhere between the top of the dam and the HWM for most of the month. It was quite stable really, fluctuating only a little over 4.5 inches from high to low. Only twice during the month did the water level rise above the high water mark, and at that only briefly. I love stopping by the dam and seeing water dribbling over the top of it. 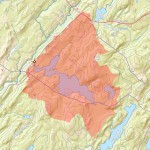 Our plentiful rainfall so far this year bodes well for ground water supplies which in turns bodes well for a generally high seasonal lake level. When groundwater supplies are low, water is actually sucked out of the lake into the surrounding ground. This can speed up the rate at which the lake level falls. When groundwater levels are high on the other hand, the water flows in the other direction: as the lake level falls, water literally comes out of the ground to replace it. This slows down the rate at which the lake level falls. This ebb and flow of water into and out of the surrounding ground comprises is a significant part of what is called our water budget. A water budget is defined as “an accounting of all the water that flows into and out of a project area” in this case, Clary Lake and it’s 9.9 square mile watershed (see above image captured from the Clary Lake watershed from StreamStats mapping program). We’ll talk more about water budgets and general lake hydrology in future articles. 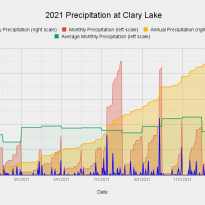 While all this rain and cold weather is generally good for the planet, it’s BAD for Browntail Moths, which of course is a GOOD thing for us humans! Cold winters and cold wet spring weather like we’ve experienced this year is bad for the little bastards and I have high hopes that they’ll be in severe decline this year. Also, the long range forecast for May from the Maine Climate Office is for continued wet and unseasonably cold weather. I’ll take it if it means the Browntail moths will die! One reason they were so bad last spring and early summer is because we were effectively in drought as you can see on the chart at left showing 2021 precipitation. We had a severe shortage of precipitation for the first 6 months of the year such that we were close to 7 inches shy of rainfall by the end of June. Then July happened and wiped out most of that deficit in one fell swoop. However, with the exception of July and September, rainfall shortages continued to plague us. Hopefully that trend is behind us for a while.

All this precipitation has allowed us to easily maintain the minimum flows for all of April, and for the entire winter in fact, with the exception of a single day in mid-February. Looking ahead, minimum flows will drop from the current 35.9 cfs to a more leisurely 8.3 cfs on May 16th at which time we’ll reduce lake outflows accordingly.