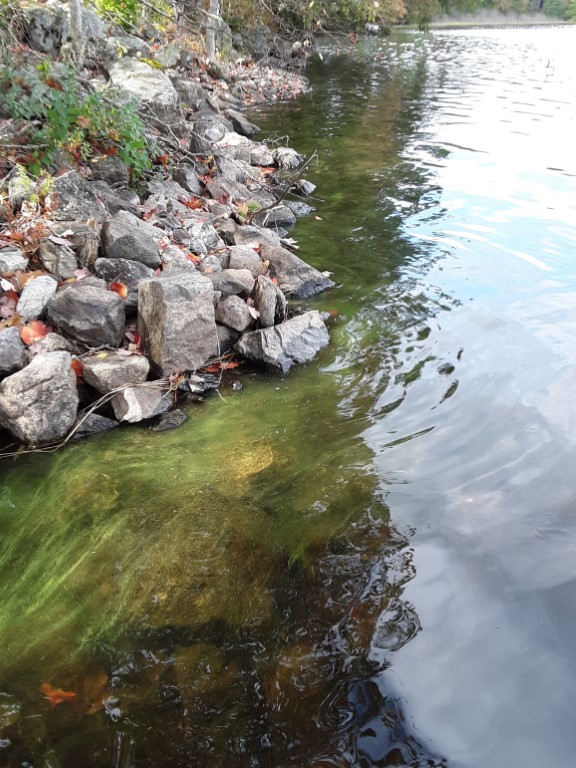 Yesterday afternoon when I walked down to my dock I spotted this dead algae washed up on my shoreline. Fifteen minutes after I took the picture, the green scum was gone. Remnants of an small algae bloom, it’s nothing to be alarmed about and there’s a very good explanation for what it is and why this occurred.

Clary’s water quality has remained high this summer in large part due to the lack of rain and the resulting lack of runoff which is a major source of Phosphorus in lakes. In deed, our most recent water sample for Total Phosphorus (TP) taken on September 1st tested at 0.013 mg/l (milligrams per liter) which for Clary is very good. For comparison, our first sample taken on June 21st returned 0.022 mg/l which is more average. We’ve seen it as high as 0.032 mg/l back in 2015 and as low as 0.011 mg/l in 1993. The image below left shows Total Phosphorus numbers for Clary Lake dating back to 1976. TP values above 0.020 typically mean we’re at risk of having an algae bloom, though other factors also come in to play. However, available Phosphorus is the biggest variable. The lack of significant algae growth this year has let to exceptionally clear water: lake transparency this summer has generally been very close to or greater than 4 meters which for Clary is very clear. Many people have remarked to me this year about how clear the lake has been. You can see a subset of our water quality data back to 2012 on our Clary Lake Water Monitoring Data page.

Phosphorus is also stored in the bottom sediments of lakes and under anoxic conditions (low oxygen) as often occurs at the bottom of some lakes in the summer, including Clary, that stored Phosphorus can reenter the lake water. However, because the lake is stratified with a temperature thermocline somewhere around 3-4 meters down, that highly soluble and reactive P from the sediment is effectively “trapped” in the water near the bottom. However, when the lake cools off and “turns over” in the fall that Phosphorus rich water at the bottom mixes with the upper water layers and can give resident cyanobacteria near the surface a proverbial shot in the arm. This can result in a short-lasting but sometimes intense growth spurt of algae which may produce a short lived bloom before the cyanobacteria quickly dies off due to lack of food. More often than not, because of the time of year and the lack of a lengthy duration and also because the nascent bloom may be isolated to only one part of the lake, most people won’t even notice it and the only indication that there were ever elevated levels of cyanobacteria in the water is when the dead and decomposing algae shows up as a green scum that washes up against the shoreline. That’s what is shown in the picture at top left. You’d be forgiven for thinking it was pollen, but the intense green color and the time of year rules out pollen which you typically see in spring or early summer and which is usually more yellow colored.

This year Clary Lake “turned over” fairly early after an exceptionally windy day in late August: our water quality monitoring session on September 1st showed the temperature stratification was largely gone and the lake water was on it’s way to being thoroughly mixed. By September 18th the lake was completely mixed with dissolved oxygen readings at the surface and at 8 meters being the same (9.1 mg/l) and only a minor (0.5° C) temperature difference between top and bottom. 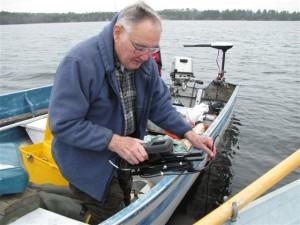 In closing, I’d like to take this opportunity on behalf of everyone who cares about Clary Lake to thank David Hodsdon (pictured at left) for his exemplary 45 years of service as Clary Lake’s principal Water Quality Monitor. My father, Stuart Fergusson actually started water quality monitoring on Clary in the early 1970’s when the Volunteer Lake Water Monitor Program (now Lake Stewards of Maine) was just getting up and running, making Clary Lake one of the longest monitored lakes in the State. Stuart encouraged David to get involved and in 1975 David took over and he’s been at it ever since. This year however David decided to give up the job he’s held for 45 years and let me and Kelsie French take the reins, apparently concluding he’d had about as much fun as he was entitled to. I didn’t agree but I accepted his decision. I only hope we can bring the same degree of dedication, quality control, and perseverance to the job that David did- we owe him that much, and more! David has been a mentor to me over the years, and a true friend. David and I still consult on water quality issues and get together every few weeks for a cup of hot black coffee and a good discussion on all things Clary Lake. Plans are underway for a more fitting tribute to David next year when hopefully this pandemic craziness will be behind us.