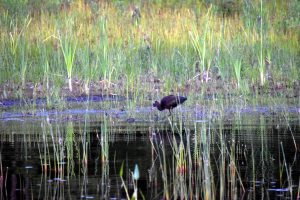 An immature Glossy Ibis spotted poking around on the shore of Clary Lake. Definitely an unusal breed of bird for these parts. Photograph by George Fergusson 13 July 2016

It’s been a good summer for rare and unique bird sightings on Clary Lake. First, back on July 13th I was on my way home from an afternoon fishing when I spotted a relatively large black wading bird poking around on the shoreline over on the Relyea property next to the Antognoni home. The light was fading and it was a little challenging taking pictures with good definition, but I got a few. I’d never seen a bird like it and was unable to identify the bird, so I sent a few pictures off to some birder contacts of mine and they quickly identified it as an immature Glossy Ibis. I’ve never seen an adult one let alone an immature one. They are known to nest as far north as Southern Maine but occasionally venture further north. 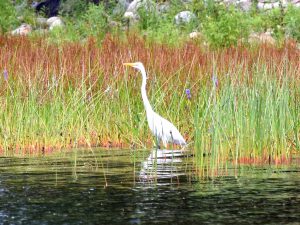 Great Egret, Clary Lake. What a graceful bird! Not unheard of around here, but definitely an unusual sighting. I’ve only seen a Great Egret one other time on Clary Lake. Photograph by George Fergusson 17 July 2016

Then yesterday afternoon I was out fishing over on the north shore when I spotted a Great Egret standing in the shallows. In all my years on Clary Lake I’ve only seen a Great Ibis one other time. They’re rare but not unheard of around here.

I checked this morning and one of the loons was sitting on the nest but there is still no sign of the loon eggs hatching, and I’m concerned that the eggs may not be viable.  While the nest was first spotted around June 12th, we’re not certain when the eggs were actually laid. Looking back at my log, I first obtained photographs of the loon eggs on June 24th which was 25 days ago, though it is likely the eggs were laid sometime before that. In any case, as long as the loons are sitting on them, I’ll hold out hope they’ll hatch.

I’ve posted a few more pictures of these birds in the Spring/Summer 2016 photo gallery.