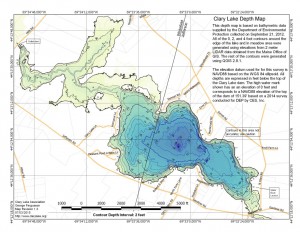 When I announced that the DEP had finally established the elevation of the normal high water line of Clary Lake, I said I would be changing my water level measurement regimen to match and would post an update about those changes when they happened. Well, they happened. Nothing earth shaking to report, but there are a few things to make note of. Since I’ve been using NAVD88 elevations all along the only thing needing to change was the index value to which water levels are referenced. Telling people the water level is 148.76′ today really doesn’t impart any useful information, which is why I’ve always stated water levels in inches with respect to the top of the dam. From now on I will reference them in inches, to the normal high water line, which is very close to the top of the dam. Data collection and basic data manipulation remains the same. The Water Level Charts themselves received a few obvious edits- the left hand axis on the charts is now “Inches Below Normal High Water” instead of “Inches Below Top of Dam” and the legend has been updated to reflect this change. The difference between the two (0.22′ or 2.59″) is so small as to not be visible on the actual water level charts. Zero on the left-hand scale used to be Top of the Dam. It is now the Normal High Water Line.

The Clary Lake Depth Maps (image above) which I prepared from bathymetric data collected by DEP in September 2012 and additional data downloaded from the Maine Office of GIS are really just graphic representations of whole-foot contour lines based on the NAVD88 datum which hasn’t changed. Consequently, the contours won’t be noticeably affected simply because the elevation of the normal high water mark changed a couple of inches. I do have to edit some of the verbiage on the maps and I’ve wanted to make a few changes to them anyways. I’ll upload new versions when they’re ready.

Similarly, the bathymetric model from which I calculate the Percent Full, Percent Area Loss, and Surface Area values for the daily narrative is based on the same datum and whole-foot lake contours as the depth maps. The bathymetric model itself consists of a handful of equations modeling the lake’s shape and size and are really just approximations to begin with. Changing the “lake full” elevation by -0.22′ isn’t going to result in either noticeable or meaningful changes in the calculated values which were plus or minus a percent or so to begin with.