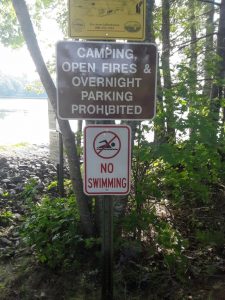 We were as surprised as anyone when a No Swimming sign appeared at the State boat launch on Clary Lake a few weeks ago. We spoke to Diano Circo, Chief Planner at the Department of Inland Fisheries and Wildlife (IF&W) and asked about the sign. It appears there have been numerous complaints of swimmers not getting out of the way when a boater wants to launch or retrieve their craft, both at the Clary launch and at other State-owned launches around the State. According to Mr. Circo, the IF&W has decided to post all State-owned boat launches. Whether this is true or not we can’t say, but another reliable source has confirmed that the State does plan on taking this action in the near future. Department of Conservation rules of conduct at State boat launch facilities prohibit swimming at State-owned boat launches but the no swimming rule has generally not been enforced. That “look the other way” stance has apparently changed. END_OF_DOCUMENT_TOKEN_TO_BE_REPLACED