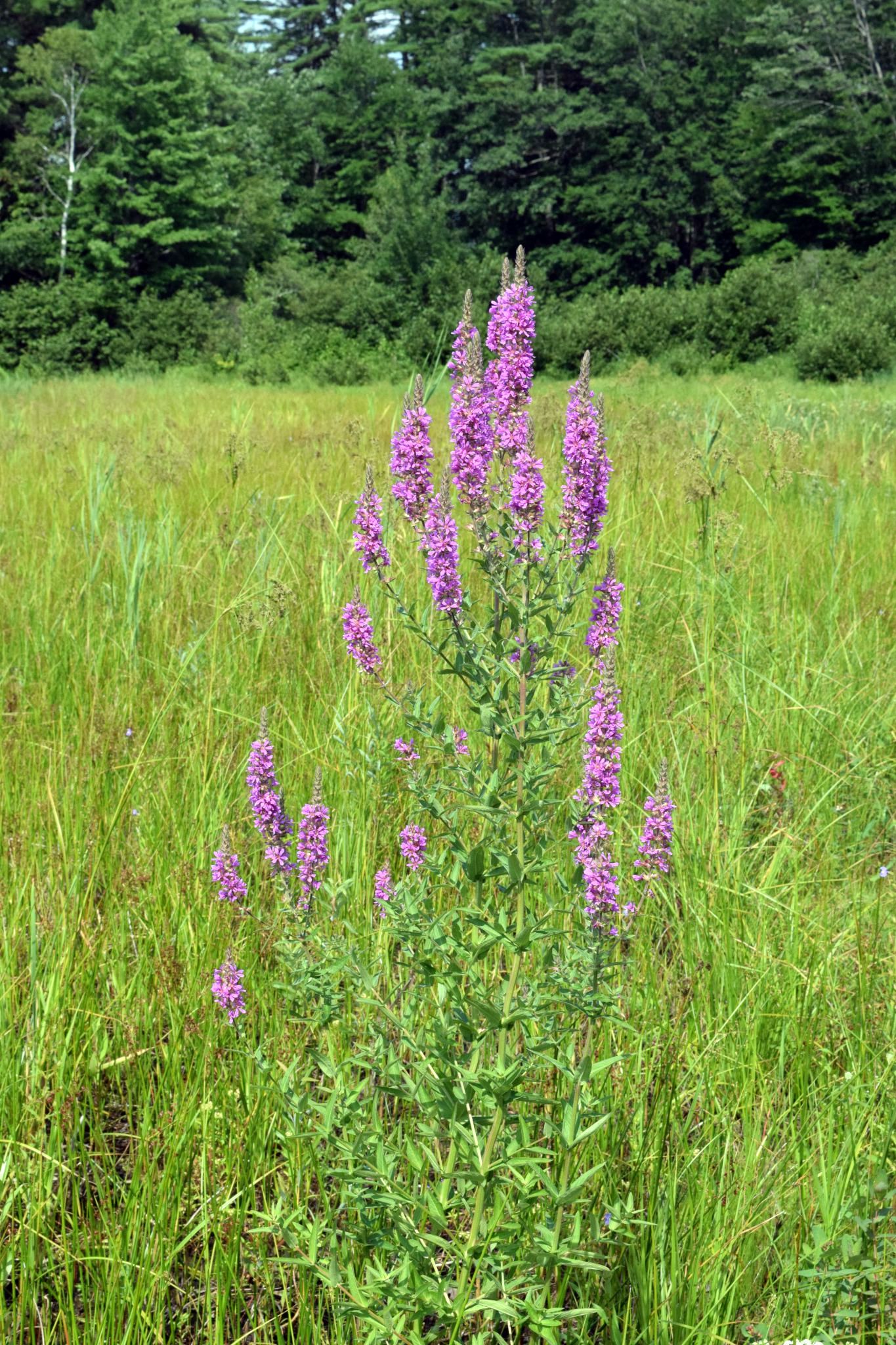 [August 2022 Update: There are still several discrete areas where Purple Loosestrife is hanging on, including several of the locations shown on the map below. I’ll update this page and the map this fall.]

For the past 3-4 years I’ve been removing isolated instances of the non-native invasive plant Purple Loosestrife (Lythrum salicaria) that I have found growing in and around Clary Lake. With the help of a couple of other people we’ve been able to keep this invasive plant at bay, but the situation is getting worse and I’m no longer able to keep on top of this issue without enlisting more help. Clary’s lakeshore residents need to step up to help manage this threat. It really is important that we prevent Purple Loosestrife from gaining a solid foothold around Clary Lake.

This year I’ve seen more Purple Loosestrife growing than ever before. A few weeks ago, Kelsie French and I spent half an hour pulling up plants growing down on the east end of the lake and the other day, some of them growing on the edge of the water, and some in as much as 3 feet of water. I spotted another large plant growing on the edge of the marsh over by Duncan Road the other day but was unable to get to it in my boat. You can see a good sized field of it doing what it does best, spreading uncontrolled in a small field across the road from the Whitefield Post Office. I’ve written about this invasive plant several times in recent years (see “29 July 2018: Have You Seen This Plant? [UPDATED]“). We need to take seriously the threat this invasive plant poses for Clary Lake.

Management of this threat is relatively simple: Dig it up, pull it up, or cut down this plant wherever you find it, whenever you find it. Removing the roots is best, if you cut it off you should keep an eye on the location as the plant will most likely return. Keep cutting it, and eventually it will die off. The plants should be removed from the area and either be composted or burned. It spreads by seed. The State of Maine’s Department of Agriculture, Conservation & Forestry has some good information about controlling this invasive plant:

I haven’t really figure out how to orchestrate our battle against this invasive plant yet. I will be adding a page under the Programs/Education menu with information about this new program. For now I’ve created this Google Map showing the location of individual Purple Loosestrife plants including when they were spotted and whether they’ve been removed. Obviously, it’s a work in progress so expect changes. I’ll add this map to the Programs/Education menu shortly.

If you spot a Purple Loosestrife plant growing around Clary Lake please send an email to ipp@clarylake.org with details of where it is, how extensive this instance is, and whether you were able to remove it (and how you removed it). Include a picture.

In this map, Purple icons show locations of actively growing Purple Loosestrife plants, Green icons with a white star are locations where the plant haqs been removed.