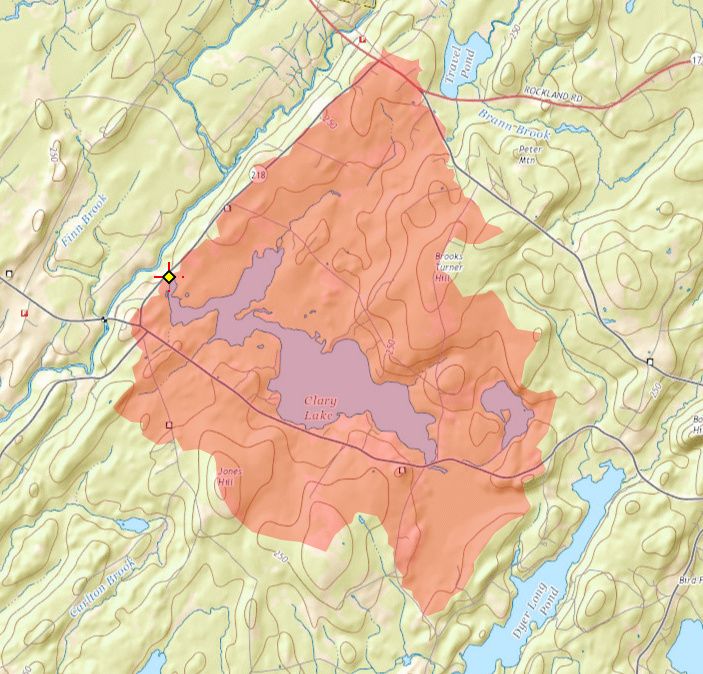 First, let me preface this by saying that I’m no expert on hydrology and minimum flows, but I have spent considerable time studying up on the role minimum flows play in our water level order, where they come from, and how they can help maintain water quality and downstream aquatic habitats. I won’t be trying to justify minimum flows, I’m only going to explain what they are, how they’re arrived at, and a little bit about how they should be implemented. While I’m not an expert, I can talk intelligently about the subject and hopefully help others gain a better understanding of minimum flows. So with that caveat out of the way, here we go!

Minimum flows are widely misunderstood and implementing a structured water level regime (such as that specified in the Clary Lake water level order) requiring both specific water levels (or water level ranges) AND also minimum flows can be very confusing. I know this to be the case because I had never heard of minimum flows and was quite confused when DEP first released the Clary Lake Minimum Flows document at the start of the water level petition in the spring of 2012. Many of the people I reached out to for answers to my questions were confused themselves and either couldn’t help, or gave me wrong information. For now it is sufficient to know that minimum flows are simply volumes of water that should be released from an impound such as Clary Lake so as to provide enough water to maintain the downstream aquatic environment. In our case, the segment of the Sheepscot River below Clary Lake, and the stream below the Clary Mill dam that runs into to the Sheepscot are considered Atlantic Salmon habitat and as such so-called “seasonal aquatic base flows” are required to sustain this important resource. “Seasonal aquatic base flows” are defined as “a median flow value for the following seasons: winter (January 1 to March 15), spring (March 16 to May 15), early summer (May 16 to June 30), summer (July 1 to September 15), fall (September 16 to November 15), and early winter (November 16 to December 31).

Requirements for minimum flows on Maine streams is clearly spelled out in the Maine Department of Environmental Protection’s Rules, Chapter 587: IN-STREAM FLOWS AND LAKE AND POND WATER LEVELS (see the “Standard Allowable Alteration” method for Class GPA waters, section 6). While it’s not an easy document to wade through, it makes for interesting reading and fully explains the purpose of minimum flows.

Minimum flows are actually the median flows (as opposed to the mean flows, there’s a significant difference between the two) for a given watershed calculated using formulae published by the United States Geological Survey (see: Estimating Monthly, Annual, and Low 7-Day, 10-Year Streamflows for Ungaged Rivers in Maine). Input for the calculations include the surface area of the water body (in acres) , the watershed area (in square miles), the percentage of the watershed that consists of sand and gravel aquifer, mean annual precipitation (inches), mean winter precipitation (inches), the distance from the coast (in miles), and the amount of water storage (combined water bodies and wetlands). In addition to the mean and median flows, values usually calculated include the seven-day, ten-year low flow value (the so-called “7Q10” flow is the lowest 7-day average flow that occurs (on average) once every 10 years), monthly peak flow statistics, and the mean and median annual flows for the water body. Clary Lake’s minimum flows recommendations were calculated by DEP’s Division of Environmental Assessment during the Agency comment period on the petition back in the Spring of 2012 (see: Maine Department of Environmental Protection – Flow Criteria). A revised Clary Lake Assessment specifying a maximum draw d0wn of 2.0 feet (rather than the initial 2.7 foot amount) was subsequently issued on 03 April 2013.

One thing that should be obvious by now is that the median flows will vary considerably throughout the year, being higher in the spring, lower in the late summer, and somewhere in between during fall and winter. Minimum flows are assigned to the 6 seasons associated with the seasonal aquatic base flows, with the median flow for the month that is roughly in the middle of the season to be the minimum flow for that season. For example, the median flows for January, February, and March are, respectively, 11.0 cubic feet per second (cfs), 11.3 cfs, and 20.3 cfs so the minimum flow for the winter period January 1 through March 15 is 11.3 cfs. So it all sort of makes sense.

Here are the minimum flows for Clary Lake specified in our WLO:

Everybody still with me? Good, because this is where it gets confusing.

Implementing minimum flows as part of a water level regime is actually a lot more complicated than one would at first imagine. Or maybe not. For guidance we refer to the Department of Environmental Protection’s Rules, Chapter 587: IN-STREAM FLOWS AND LAKE AND POND WATER LEVELS Section 6. “Water level requirements for Class GPA waters,” subparagraph 6-A(2). Note that while the text doesn’t actually use the term “minimum flows,” that is what they are referring to when they use the term “seasonal aquatic base flow.”

“Flow in the outlet stream must be sufficient to maintain seasonal aquatic base flow, as defined in sections 4, 5, 7, or 8 of this chapter with adjustment for evaporation loss from the Class GPA water, or the natural inflow minus evaporation, whichever is less.”

The language in the Clary Lake water level order (on page 11) regarding minimum flows neglects evaporation and so is a little simpler:

“Based upon results of modeled lake watershed flow criteria, DEA staff determined that minimum outlet flows from Clary Lake should be maintained at not less than the following seasonal flows, or inflows, whichever is less to maintain water quality.”

I am not going to discuss how the Clary Lake dam should be operated to provide the right flows under the right conditions. That is the job of the dam owner. Perhaps one of these days the Clary Lake Association will own the dam, and then it will be our problem to run it correctly. Until then, it’s the current dam owner’s problem to run it as they see fit, and I wish them luck: the existing gate arrangement does not lend itself to easy or convenient water level maintenance. While I won’t get into dam operation specifics, I will briefly discuss some of the things that need to be considered to correctly operate the dam so as to maintain the right minimum flows.

In order to make sure the right amount of water is being released at any given time, we need to know the following:

As for question 3, how much water is actually being released, special condition #5E of the Clary Lake water level order specifies that the dam owner must establish a procedure for monitoring and maintaining the required minimum downstream flows from Clary Lake as outlined in the Order. Special Condition #6 also requires a permanently mounted lake level gauge. To date I am not aware of the dam owner having complied with either special condition. Gearing up to measure the actual outflows from the Clary Lake dam under varying outflow rates, while non-trivial, is not rocket science.

Question 4, determining actual inflows is certainly not an easy task and in practice, if you can answer questions 1, 2, and 3, answering question 4 is unnecessary. The bottom line is if the lake level is maintained in accordance with the water level regime called for in the Order, the minimum flows should take care of themselves. However, being able to at least estimate actual inflows with a reasonable level of confidence would be a good check on things and I think it would behoove a dam operator to at least periodically document estimated inflows in the event that dam operations are ever called into question. The StreamStats program (discussed next) might provide a means of answering question 4.

The United States Geological Survey (USGS) now offers an outstanding web-based interactive mapping system called StreamStats which allows you to calculate the basin characteristics and stream flow statistics for any stream/watershed in Maine, dynamically, in real time, and then generate detailed reports, free of charge. By selecting the outlet stream for Clary lake at the dam, I was able to generate the following reports for Clary Lake:

You’ll find definitions for the various abbreviations in the above StreamStat reports on the definitions page of the USGS StreamStats website.

Since DEP has already done the watershed and stream flow calculations for Clary Lake, using the StreamStats program isn’t necessary to implement minimum flows at the Clary Lake dam, but it can certainly help us understand the flow dynamics of the Clary Lake watershed. What is really cool about StreamStats is that you can also generate basin characteristic and flow statistic reports for the smaller streams that feed into Clary Lake. Want to know how much water the Three Corner Pond watershed contributes to the outflows at the Clary Lake dam? You can do it! How about that stream flowing through your property? If it’s shown on the StreamStats map page, you can generate basin characteristics and flow statistics for it. 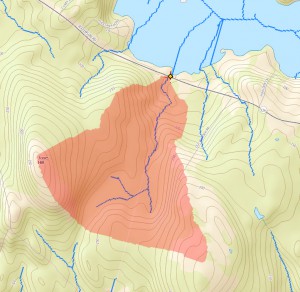 Screenshot from the StreamStats program showign the watershed associated with the stream flowing into Clary Lake at the Jefferson/Whitefield town line.

StreamStats makes it feasible to estimate with a relatively high degree of accuracy the real flows into Clary Lake (and hence the outflows) simply by measuring the actual inflows at several discrete locations around the lake. Measuring stream flows at culverts is trivially simple; if you were to measure the flow into the lake at the culvert on 126 at the Jefferson/Whitefield town line (pictured at left), at the culvert at the intersection of Routes 126 and 215 which comes in from Three Corner Pond, and at Clark’s Meadow Brook on the Sennott Road, you would know the actual inflows for a little over 1/2 the Clary Lake watershed. From that data it would be simple to extrapolate the total inflow, with a fairly high degree of certainty I would think. In theory anyways. It would certainly make an interesting experiment.