Welcome to the Clary Lake Association News and Discussion page! Learn to use the Search feature (located at the top of the sidebar). You do NOT have to be logged in to leave a comment. See our User Policy and other information under the Site Help menu. If you have a question, feel free to use our Contact Form to ask it! 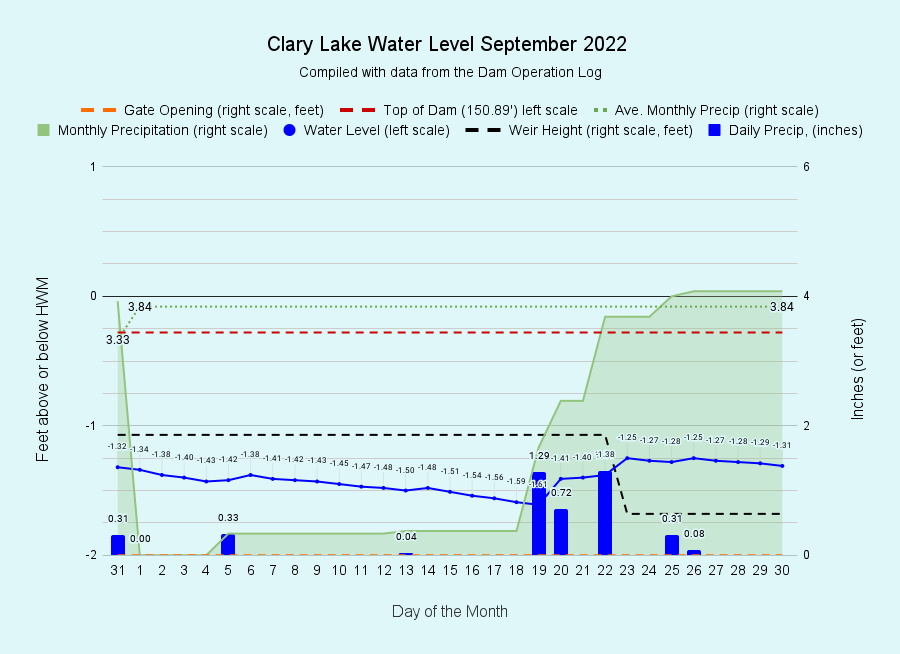 I have archived the September 2022 Water Level Chart (at left). For the second month in a row we received a little more than the monthly average amount of rain though it wasn’t until the month was a little more than halfway over that the heavier rains finally arrived. This late influx of water allowed us to bring the lake up to a more reasonable level for the time of year We ended up receiving 4.08 inches of rain (normal is 3.84 inches). We’re now 1.14 inches ahead of normal for this date. Had the rain deficit we saw at the beginning of the month continued, we’d have ended the month with the lake level down around -2 feet. Instead, we’re more or less where we should be as we head into fall. We spent much of the summer with a lake level considerably lower than in the previous 3 years. We’re now more or less back to normal. This has allowed us to resume our dam management activities and on the 22nd we removed 4 stop logs in preparation for the winter drawdown. END_OF_DOCUMENT_TOKEN_TO_BE_REPLACED 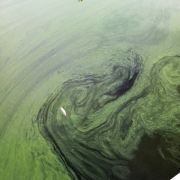 Clary Lake is experiencing an algal bloom this fall and today I was met with an unpleasant, but sadly not unexpected site when I walked down to my dock with a cup of coffee, to savor the morning. Dead blue-green algae (cyanobacteria) slowly swirling around my dock like green smoke. We’ve seen reduced lake transparency due to algae growth since late-August, and it’s only gotten worse. I’ve been expecting to see something like this on my shoreline for a while now. I posted about our declining water quality back on September 5th (Clary Water Quality Declining). This current “bloom” covered an area of about 200′ by 600′. Our last official secchi disk measurement taken on September 3rd was 2.38m (7.8 feet). I’ve taken a few additional secchi disk readings since then and they’ve all been in the 2.2m range. After seeing this mess around my dock I went out with my secchi disk and found the transparency to be 2.30m. Back on September 4th a small patch of green was spotted over at the State Boat launch, and I saw just a hint of it, a few wispy tendrils, yesterday when I was out fishing. Here’s a short video I took this morning to show you what it looked like as I headed out in my boat: END_OF_DOCUMENT_TOKEN_TO_BE_REPLACED 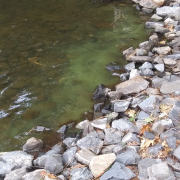 You might have noticed that Clary’s water has been getting cloudy. Sadly, it’s not just your imagination! Last Saturday afternoon Kelsie French and I went out for our twice-monthly water quality monitoring session and we recorded a secchi disk reading (a measure of water transparency) of 2.38m (7.8 feet), down from 3.15m (10.33 feet) two weeks earlier. The next day, Dave Knight  who was on CBI duty at the State boat launch, took the picture at left and sent it to me. I was not surprised. What the picture shows is dead  blue/green algae (cyanobacteria) which floats to the surface where it’s pushed around by wind and waves. Eventually it sinks to the bottom and decomposes. Less than an hour after he took this picture, the green stuff was gone. Technically, an algae bloom is defined as a secchi disk reading of 2m or less, though in my opinion, anything below 3 meters (9.8 feet) puts you in bloom territory and we’ve been there for a few weeks now. A little dead blue/green algae washes up every year and it’s nothing to be too concerned about, but this year we’re likely to see a good deal more than usual in the next few weeks. In other words, our water transparency is likely to deteriorate further before it starts to clear up later this fall. We’ll be taking another water sample for Phosphorus testing in two weeks and will be monitoring lake transparency weekly until this algae growth winds down. Keep an eye on our Water Quality Data page. END_OF_DOCUMENT_TOKEN_TO_BE_REPLACED 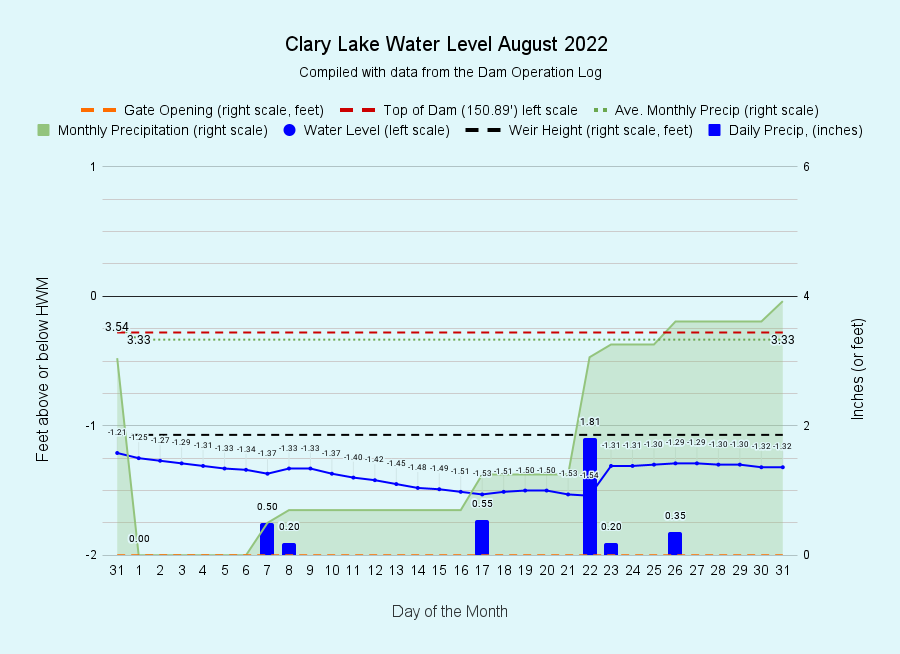 I have archived the August 2022 Water Level Chart (at left). In August we finally got a reprieve from the drought conditions that have plagued us for the last 4 months. For the first time since April we received more than the average amount of monthly rainfall. All told, we received 3.93″ of rain, 0.6″ more than average. Drought.gov now shows us to be in Moderate Drought which is less droughty than previously, suggesting that ground water supplies are improving but are still somewhat depleted. My own rainfall records show us 0.90″ ahead for this date but that doesn’t speak to groundwater supplies. END_OF_DOCUMENT_TOKEN_TO_BE_REPLACED 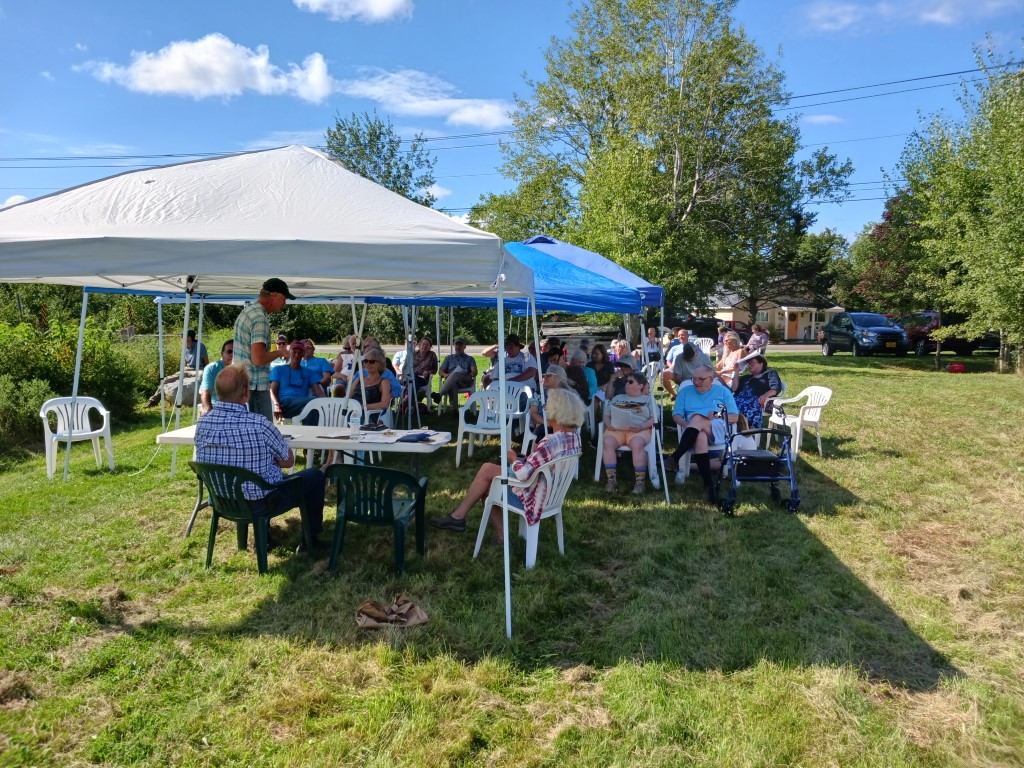 The Clary Lake Association’s 2022 Annual Meeting happened, last Saturday at the Clary Lake dam. We couldn’t have asked for a better day. The weather was perfect, the meeting was well attended (we even had a quorum this time!) and the food, as usual, was excellent (the baked black crappie and the blueberry pies deserve special mention). Because of the raffle drawing, we didn’t have a main program this year. After introductions, the meeting started with review and acceptance of the 2021 Annual Meeting minutes followed by the Treasurer’s Report and Proposed budget. Elections next, only one spot open this year: Maggie Muth was voted in as a Board member for 3 years, replacing outgoing Board member Kelsie French. Next came the Program and Committee reports: the Annual Loon Count presented by Mary Gingrow-Shaw; the Loon Restoration Project presented by Eleanor Goldberg; the Dam Operations, Courtesy Boat Inspection, and Lake Water Quality Program reports presented by George Fergusson; the Program and Events Committee report presented by Margaret Fergusson; and an update on the Dry Hydrant presented by Steve Cowles. Numerous questions were asked and answered. The only new business was a short statement at the end by Thomas Vigue about his plan to petition the IF&W to stock Clary Lake with  Brown Trout. You’ll find a few more meeting pictures in the Spring/Summer 2022 photo gallery. END_OF_DOCUMENT_TOKEN_TO_BE_REPLACED 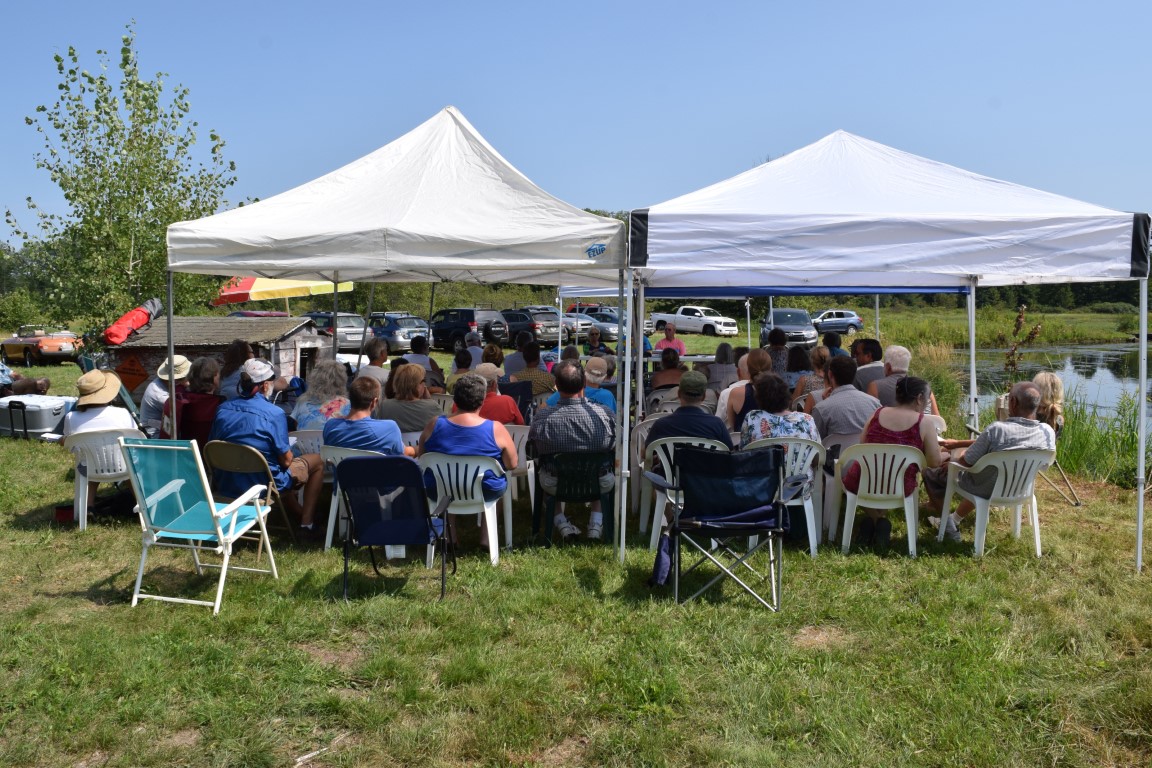 The 2022 Annual Meeting of the Clary Lake Association is this coming Saturday, August 27th, at 2:00PM at the Clary Lake dam on Route 218 in Whitefield. The weather is supposed to be excellent. We’d like to start on-time so if you’re planning to join or renew your membership for the upcoming 2022/2023 Membership Year at the meeting, please arrive early! We’ll have a registration table setup by 12:30PM. Dues are $25 per member which entitles you to one vote on matters brought before the Membership. You can also signup or renew your membership online using our Secure Paypal gateway (our membership year runs from Annual Meeting to Annual Meeting). We’ll also be selling raffle tickets prior to the start of the meeting at 2PM. The raffle drawing will be held at the conclusion of the  business meeting. Here’s some additional information about our Summer 2022 Raffle. END_OF_DOCUMENT_TOKEN_TO_BE_REPLACED 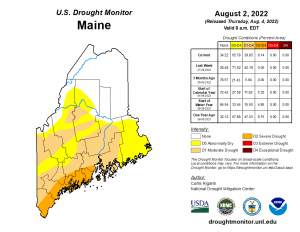 The drought is getting worse. We’re now in Severe Drought, and the 1/2 inch of rain we received in yesterday’s squall, though welcome, actually did little to ease the dry conditions. A month ago we were in Moderate Drought (see: 8 July 2022: Moderate Drought). It’s only gotten worse. We’re supposed to get another 1/4 to 1/2 inch in the next couple of days but as welcome as it is, it won’t do much to relieve the extreme dry conditions; we need an extended period of slow soaking rains to replenish ground water supplies and relieve the parched earth. See Drought.gov for more information.

Usually the header image/banner on the website rotates randomly. I’ve decided to highlight specific banner images for a while. I’ll pick one and leave it up for a few days. Today’s banner is from a photograph Carolyn Curtis took this very afternoon at her camp on Hornpout Lane, looking east when a rain squall passed over. Now THAT is a rainbow. Wow. Thank you Carolyn! Here it is again: 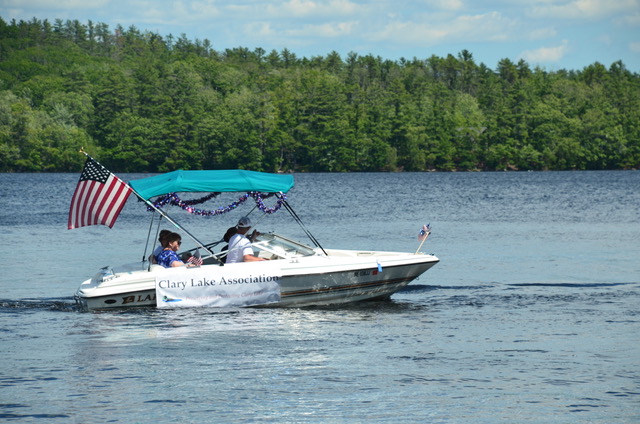 Sometime around midsummer I like to provide a Membership update, to let people know where we stand and to gently remind people to send in their dues if they’ve forgotten! As for where we stand, we’ve got 129 people signed up for the upcoming membership year so far which puts us 73% of the way towards meeting our 2022/2023 Membership goal of 175. I guess that’s more or less where we should be this time of year. Of that 129 members, 18 are new to the Clary Lake Association. I find it very gratifying that we’re still attracting new members!  After all, if you care about Clary Lake and appreciate having a lake full of clean water where you can swim, boat, and fish, you should support the Clary Lake Association! You’ll find plenty of reasons on our Benefits of Membership page. END_OF_DOCUMENT_TOKEN_TO_BE_REPLACED 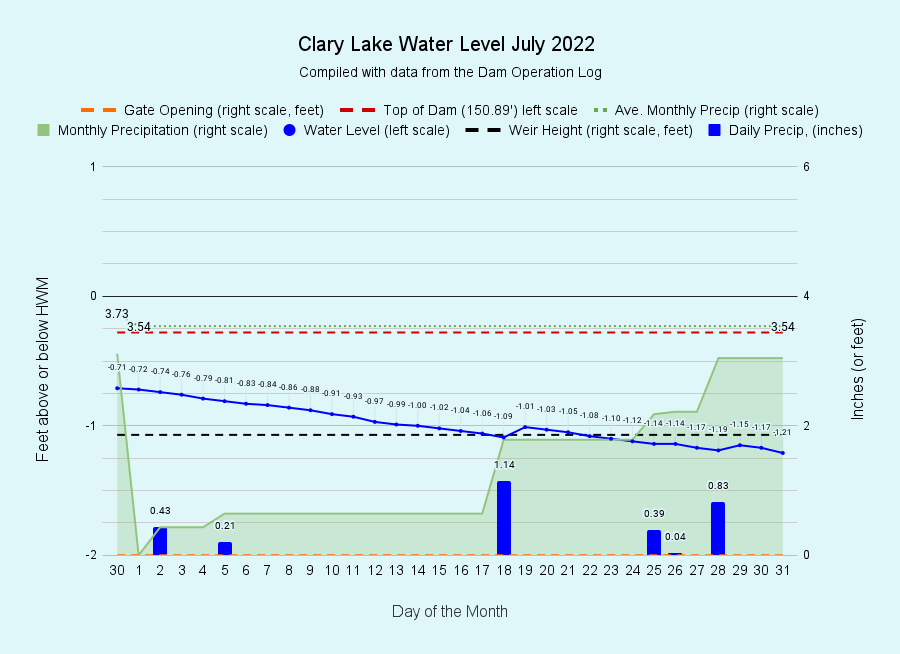 I have archived the July 2022 Water Level Chart (at left). Easily the most notable thing about the July chart is the steady decline in the lake level for pretty much the whole month! In fact, the lake dropped 28 of the 31 days in July, only rising slightly (or remaining unchanged) on 3 days in response to rainfall received on the 18th, 25th, and the 28th. We ended up with 3.04 inches of rainfall for the month, 1/2 an inch shy of the normal 3.54 inches. To date we’re still 0.30 inches ahead of normal, but don’t be fooled: as I’ve pointed out before, total rainfall doesn’t really give an accurate picture of ground water supplies. We’re currently in moderate drought meaning groundwater supplies are hurting. Here’s a great map of the State: https://www.drought.gov/states/maine. The government site is blocking the Maine Climate Office for some reason which is why our weather page is showing a broken drought graphic 🙁 END_OF_DOCUMENT_TOKEN_TO_BE_REPLACED