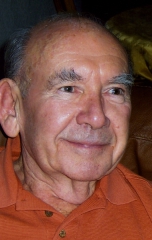 A native of Nashville, Tennessee and Richmond, Virginia, and a long-time resident of Baton Rouge, Ed died peacefully at home surrounded by his family on Wednesday, June 19, 2013. He was born on May 19, 1923. He is survived by his wife, Lydia “Diane” Grant, and his children: Edward D. Grant, III of Ketchum, Idaho, James S. Grant of Cape Coral, Florida, Chris R. Grant and wife Cindy of Henderson, Nevada, and Kate Grant Seba and husband David of Baton Rouge. He is also survived by his stepchildren William “Bill” Spann, Jr. and wife Janie, Ronnie Spann and wife Sheryl, and Lydia Neustrom, all of Baton Rouge; fourteen grandchildren, ten great-grandchildren, one cousin, Mary Jim McDonald of Texas, and a brother-in-law Thomas Gillette and his wife Delph, also of Texas. He was preceded in death by his parents, Edward D. Grant, Sr. and Georgia Voyles Grant. He attended Davidson College, and then proudly served his country in the Army Air Corps as a B-17 pilot in WWII, based with the 95th Heavy Bombardment Group in Horham, England. For his contribution to the liberation of concentration camps in Germany, he was honored by the Jewish Federation of Greater Baton Rouge. Ed was the proud founder of Grant Chemical Corporation. He was a member of the Baton Rouge Kiwanis Club, the Louisiana Chemical Association, the Baton Rouge Country Club, the Baton Rouge City Club, and was a Charter Member of the Camelot Club of Baton Rouge. He served on the Boards of the Baton Rouge Chamber of Commerce and Capitol Bank, and served as a past President of the Baton Rouge YMCA, and the Clary Lake Association in Jefferson, Maine. He was a member of First Presbyterian Church in Baton Rouge. At Ed’s request, no funeral will be held. All who loved Ed are invited to a gathering celebrating his life to be held at his home in Baton Rouge LA on June 30th at 4:00 p.m. He will be interred at a later date at Oak Grove Cemetery in Bath, Maine. The family’s deepest appreciation is extended to Dr. William Moore and nurses Mallory and Brooklyn, Ed’s “girlfriends” and nurses, Janet Beckwith and Heather Cahill, and Robin Roberts of Cardinal Hospice. We cannot thank you enough for the love you showed our family during this most difficult time. In lieu of flowers, donations may be made to First Presbyterian Church in Baton Rouge, LA, St. Giles Episcopal Church in Jefferson, Maine, or the Clary Lake Association, PO Box 127, Whitefield, ME 04353. Resthaven Gardens of Memory is in charge of arrangements.