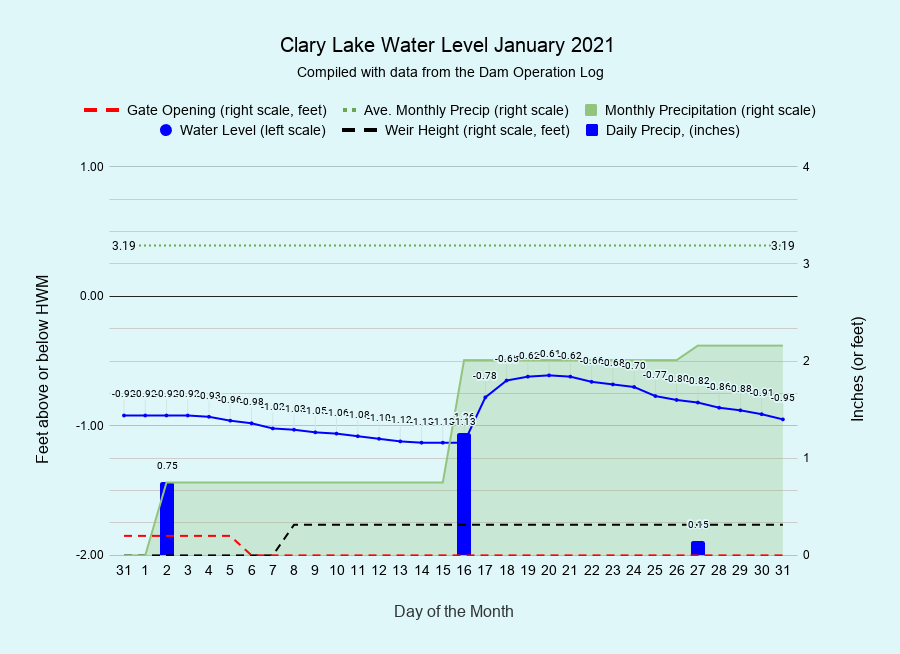 I have archived the January 2021 Water Level Chart (at left). The drought conditions that plagued us last year have returned early in 2021 with January’s precipitation of 2.16 inches falling considerably short of the normal monthly precipitation of 3.19 inches. February is the month with typically the lowest (2.61 inches) monthly precipitation of the year. We’re going to start February with a decent shot of snow in a couple of days. Hopefully we’ll develop a good snow pack by spring.

Despite the overall lack of precipitation in January, the lake level remained relatively high throughout the month. Minimum flows dropped to 11.3 cfs on January 1st and will stay there until mid-March. Our goal was to meet those minimum flows while trying to keep the lake level somewhere between 12 and 18 inches below the top of the dam. With no significant precipitation in sight, we added a single stop log on the 8th to slow down outflows a bit. We were on track to meet our water level goal until the 16th when the single biggest precipitation event of the month occurred, dropping 1.25 inches of water on us in the form of heavy wet snow and rain. We decided to leave the gate and weir alone and let the lake level find it’s own happy medium, which it did, rising to -0.61 feet before ending the month only a few hundredths of a foot lower than it started.

There’s plenty of ice on the main body of Clary Lake, unlike a lot of other lakes in the area though if you head up into the marsh I’d be on the lookout for open water or thin ice in the channel as moving water interferes with freezing. Best stick to the edges of the marsh just to be on the safe side! There’s also a substantial pressure ridge on the northwest and of the lake you’ll want to be careful to avoid. Damariscotta Lake still has large areas of open water which is unusual this time of year, to say the least!