Sorry for the short notice! This public hearing is TOMORROW! I received this notice of pending legislation in my mailbox just now and decided to post it on our site. The Clary Lake Association is deeply concerned with protecting all Maine lakes and Clary Lake in particular from the unwanted introduction of invasive species. To that end we are 3 years into a long term Courtesy Boat Inspection program and are developing plans for an Invasive Plant Program for Clary Lake. Submitting a short comment to the Environment and Natural Resources Committee is simple and worthwhile. You can see what comments have already been left at the above link. Comments need not be long or involved. This is important. Thank you for being concerned.

The second session of the 130th legislature is underway! While there is a lot going on during the session, there are only a few lake bills we’ll be reaching out to you about this year. The first one has a public hearing coming up soon: Monday, January 10th at 10:30 a.m. via Zoom.

LD 1826 creates a subcommittee of the existing Interagency Task Force on Invasive Aquatic Plants and Nuisance Species. The subcommittee will: END_OF_DOCUMENT_TOKEN_TO_BE_REPLACED

[UPDATE] This event was cancelled due to the storm. It will be rescheduled, likely sometime in March.

I will be attending this event, weather permitting. If anyone wants to join me, give me a call or email me.

[dropcap]I[/dropcap] am pleased to announce that at a work session held earlier today the Legislature’s Environment & Natural Resource Committee voted unanimously Ought Not To Pass on LD 1566 “An Act Concerning the Establishment of Water Levels.” In it’s place, DEP will add a requirement to their rules pertaining to water level petitions for a public informational meeting including notices in local papers, a mailing to all lake front owners, the dam owner, and the town(s) in which the impoundment resides. The purpose of the meeting is to inform everyone of the requirements of the law governing water level petitions and the actual petition and adjudicatory hearing processes, and to encourage people to find a negotiated solution to their water level issues.

I received the following email from the Maine Lakes Society regarding the upcoming 10 February 2016 public hearing on LD 1566 “An Act Concerning the Establishment of Water Levels.” The Clary Lake Association will be testifying in opposition to the bill at the public hearing. A copy of the prepared testimony will be presented here at a later date. 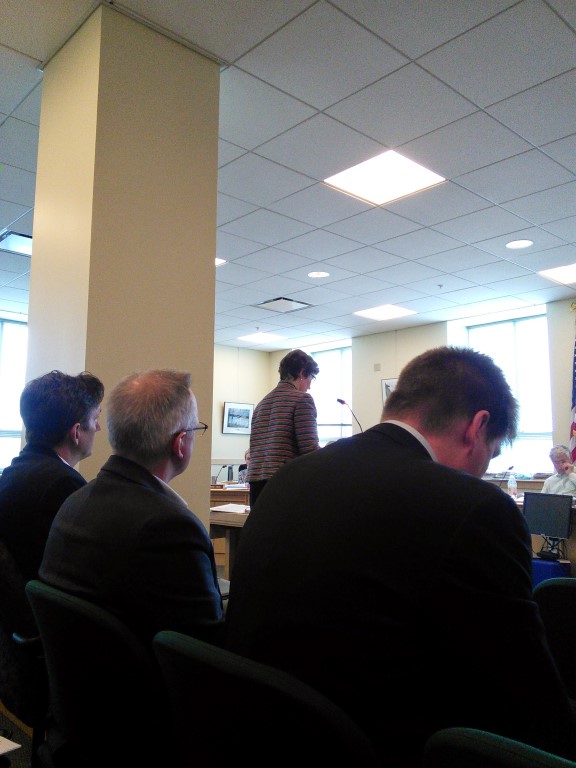 DEP Commissioner Patricia Aho testifying before the Environment and Natural Resource committee. I was there for a work session on LD 1244, “An Act To Amend Environmental Permitting Standards”; the Commissioner was actually testifying on a different bill at the time, she did not comment on LD 1244. Photograph by George Fergusson, 29 April 2015

The Maine Department of Environmental Protection introduced proposed legislation this past spring entitled “An Act To Amend Environmental Permitting Standards.” The proposed legislation, designated LD 1244 and sponsored by Republican Senator Thomas Saviello, was turned over to the Committee on Environment and Natural Resources (ENR) of which he is co-Chair, on Apr 7, 2015. The main thrust of the legislation had to do with changes to the application and permitting process for wind power and micro hydro projects, but sections 10 and 11, tacked onto the end of the bill, were proposed changes to Title 38 MRSA §840 otherwise known as the Water Level Law. This is the law that governs the water level petition process including a requirement for an adjudicatory hearing. This Maine Legislature Information Page  has links to everything pertaining to LD 1244.

I first became aware of the bill on April 24th, a few weeks after it was introduced, and I developed an immediate interest. I didn’t initially feel the need to bring it up on this site because the proposed changes to the law would not affect the Clary Lake water level order, which is already issued, though not yet enforced. However I believed the changes would have a profound impact on other parties contemplating their own water level petitions and so decided to take a stand on the issue. Though I missed the initial work group session where the ENR Committee solicited public testimony, I did attend a subsequent work group session, submitted written comments on behalf of the Clary Lake Association, and was given a brief opportunity to speak on the bill despite the time for public testimony having already passed. I am grateful to both chairs of the committee, Senator Saviello and Representative Welsh, for this opportunity. I believe the Committee heard what I had to say.

The changes requested by the Department included requiring mandatory mediation before any member of the public could file a petition, which I actually thought was a fine idea, but I felt the language was way too loose and needed to be tightened up. In addition, the Department wanted to raise the application fee to cover the actual costs of conducting an adjudicatory hearing. The original language of Section 11 as initially proposed is as follows: END_OF_DOCUMENT_TOKEN_TO_BE_REPLACED

The Maine Lakes Society (formerly the Congress of Lake Associations or COLA) has sent around a legislative update in an attempt to solicit interest in several important bills currently before the Maine Legislature,  LD 1744 and LD 1626. Sadly, I don’t have the free cycles to get involved in any legislative activities at this time, but perhaps someone out there reading this will.

The Clary Lake Association has been an MLS (COLA) member for a long time.