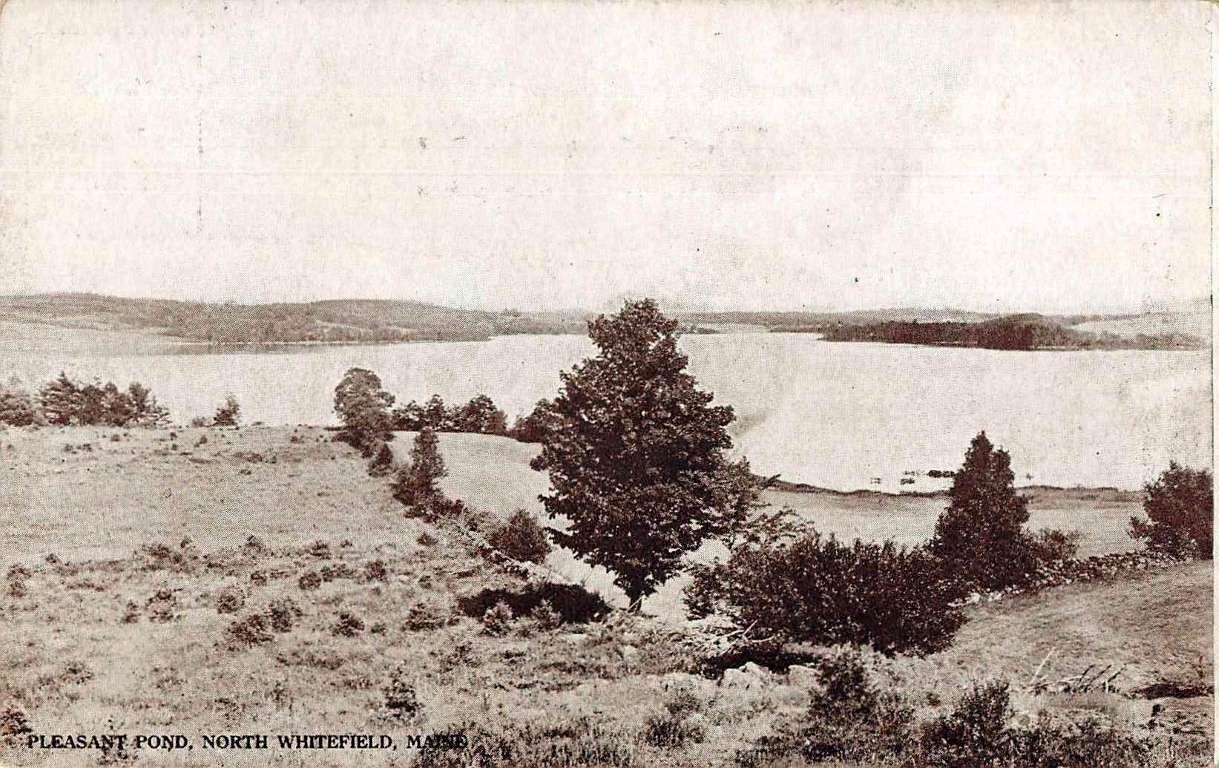 Earlier this year someone sent me a couple of old postcards featuring pictures of Pleasant Pond (now Clary Lake). I’m just now getting around to posting them in our Historical Photos gallery. It can be hard to figure out where some of these old pictures were taken, I’m relying on my understanding of the topography around present day Clary Lake. The one at left I believe was taken from near the Metcalf property looking southeast toward where the boat launch is today. The date is unknown but likely around the turn of the last century.

This one I think is looking north towards the outlet channel and was likely taken from near the old Ward Sisters home, now the Relyea property. Again the date is uncertain but probably around 1900. I’m very interested in old vintage photographs of Clary Lake (formerly Pleasant Pond). If you run across any please send them my way! 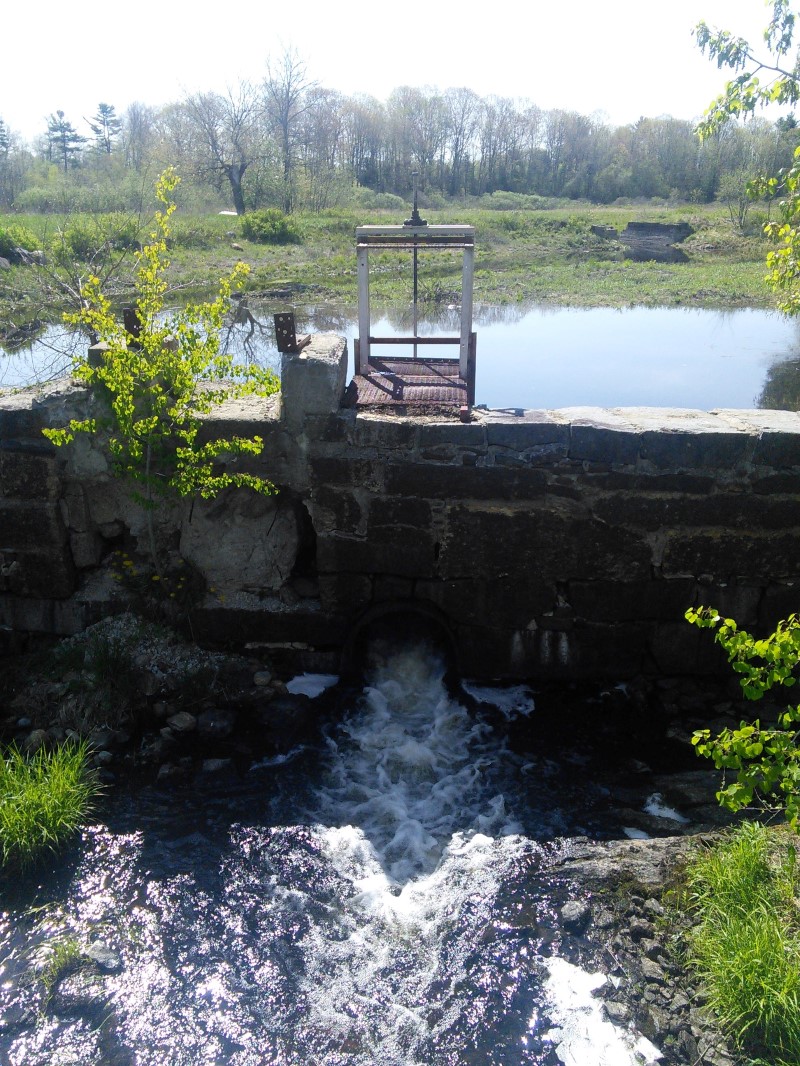 Late last Thursday afternoon for reasons known only to himself, the Clary Lake dam owner closed the dam’s gate to within about 7″ of completely shut. As you can see from the picture at left, there’s still quite a bit of water flowing out of the lake but the mill pond behind the dam has considerably more water in it than when the gate was wide open. However, while the water may be backing up behind the dam, the lake level is still falling about 1/4″ per day. Remember, water only flows down hill and there is a mile and a half of meandering channel down which the water has to flow to get from the lake to the dam. With the gate wide open and the lake this low, I suspect the water level right at the dam itself has been as much as 2 feet lower than out on the lake, perhaps even more. I’ve actually measured a 3″ difference when gate was wide open and the lake was almost full. Albert Boynton whose family owned the dam in the 1920’s and who was actually born in the little red house on the dam told me once that after a morning of sawing lumber, the upper mill pond would have fallen considerably; when they returned from dinner, it would be full again.

END_OF_DOCUMENT_TOKEN_TO_BE_REPLACED 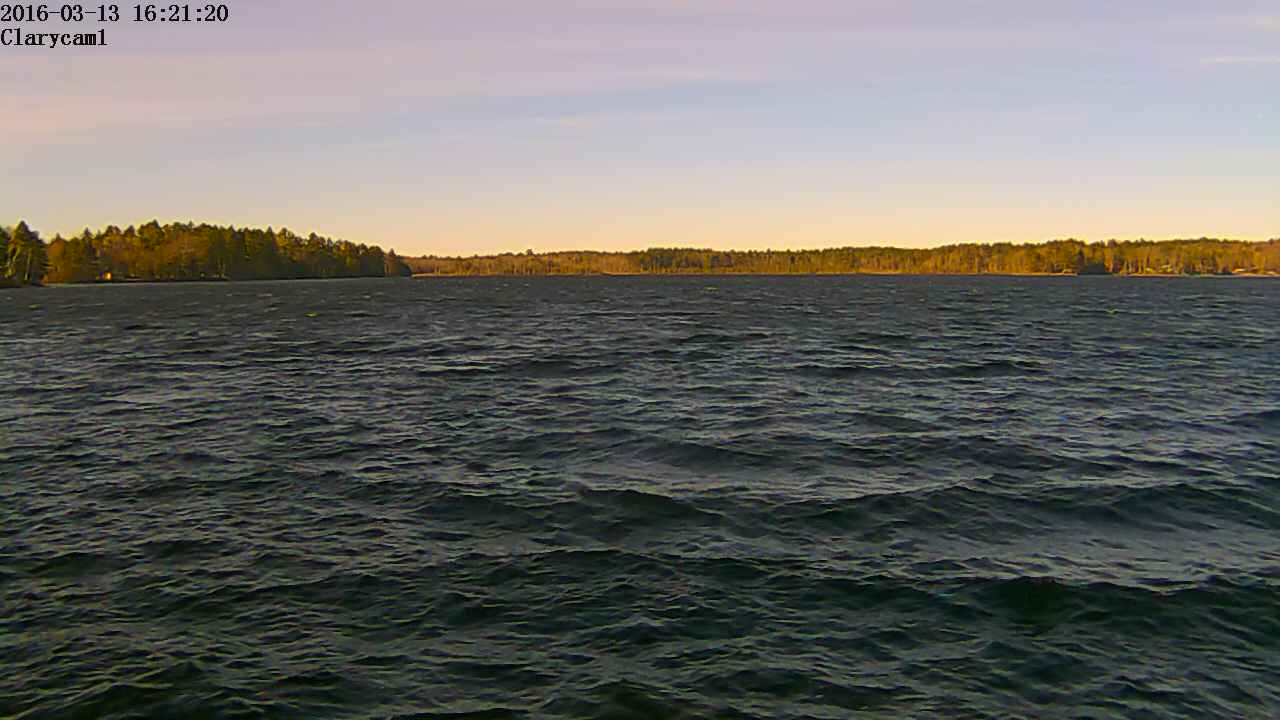 David Hodsdon usually makes the official ice-out determination but I haven’t heard from him today and according to my precise calculations, today Clary Lake became completely ice-free. The northwest end of the lake from the outlet around the point at the end of Duncan Road has been ice-free for some days but the southern side which gets less direct sunlight was still mostly iced in until yesterday. Today’s high winds (see above) rapidly broke up and dispersed the remaining ice sheets. Today marks the earlier start of the open water season on Clary Lake going as far back as 2001, when our records start. The criterion for ice-out is when the lake is sufficiently free of ice that one can boat round the lake within a few feet of shore (essentially completely free of ice).

According to the Clary Lake Water Level Order, at ice-out the lake level should be at or very near the “normal historical high water mark” of the lake which has been determined by DEP survey to be at an elevation of 151.2′ which corresponds with the top of the dam. The lake level is supposed to be maintained at that elevation or as close to it as possible through the end of July to provide a stable water level to maintain fish and waterfowl breeding habitat. Unfortunately, the lake level is currently a little more than 2 feet below that elevation and falling and with no snow pack to provide spring runoff, we’re entirely dependent on spring rains to keep the lake level from falling too far, too fast. I’m not very optimistic.

I’ll post a time lapse video of this year’s ice-out shortly. I can’t wait to get my boat in the water. 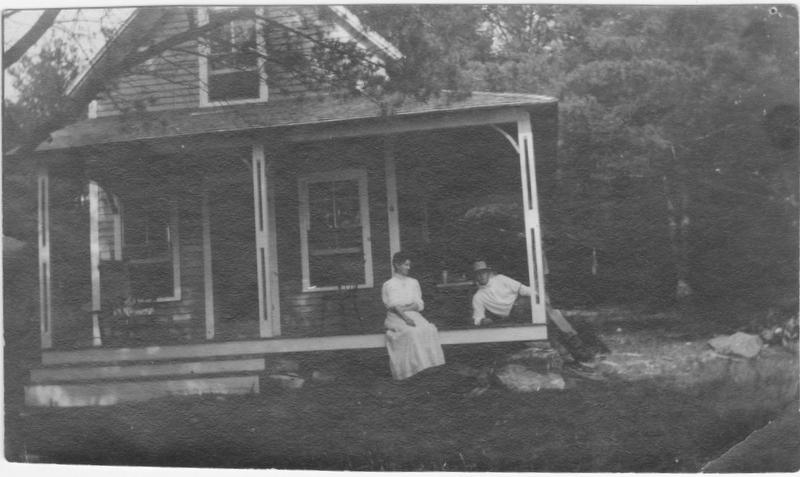 Captioned on back, “Harold and me. Henry Clary’s cottage, Clary Lake”. This is Harold and Inez Carpenter, my great uncle and aunt. Inez was my Great Aunt Belle Douglas’s sister. Submitted by Steve Giampetruzzi. Click for a larger version.

Steven Giampetruzzi has uploaded two pictures to the site of historical interest, they are undated but appear to date from the early part of the last century, sometime after 1910. One photo in particular has piqued my curiosity, it shows what is described as “Henry Clary’s cottage, Clary Lake” (at left). Does anyone know where this might have been located? Henry Clary lived and owned property in Jefferson but I was unaware also had a place on Clary. I would very much like to know where this place was located. END_OF_DOCUMENT_TOKEN_TO_BE_REPLACED

The Clary Lake Clarion was first published during the summer of 1931 by Eugene Stuart Fergusson and Paul MacDonald. This is a page from the 1st issue.

Several people have commented on the name of the Clary Lake Association’s newsletter and wondered how we came up with it. This is the story.

Back in 1931 my father, Eugene Stuart Fergusson, and his friend Paul MacDonald ran a small local newspaper called the Clary Lake Clarion. My father who was 17 at the time was the Editor in Chief of the paper and for reasons known only to himself he used the pen name Evgenie Georgovich Novgorodski. Paul MacDonald, 2 years older than my father, was the Telegraph Editor, Paul’s sister Ruth was a reporter, and the young John Robert MacDonald was the paper delivery boy.

The paper was published Saturday night in an attic room in George and Ethel Fergusson’s house, using a typewriter and carbon paper, and it was delivered on Sunday morning by young John Robert on his bicycle. The paper sold for 6¢ a copy, the proceeds of which largely went to pay for a telephone in the office. Having  a telephone back in 1931 was a big deal. END_OF_DOCUMENT_TOKEN_TO_BE_REPLACED

Jane Chase came across 5 old photographs showing repairs being made to the dam back in the fall of 1993. I’ve scanned them and added them to the Chase Family Archive. Art Enos subsequently bought the dam in February of 1995. I recall when the work was being done, the mason Ron Bourassa was a friend of mine and I remember stopping by a few times to watch what was happening. One of the new photographs shows Steve Schlosser who was Ron’s tender on that job. The 5th & last photograph shows someone removing sand bags from the stream

with a backhoe while dismantling the coffer dam that had been constructed at the narrow gauge railroad abutments. Some of those sand bags are still in the stream as can be seen in the photograph at left, taken by me in the Spring of 2012.

I’d like to thank Jane (again!) for providing these photographs and encourage anyone with old photographs taken on or around Clary Lake to please send them to me.

I’ve added two new photos to the Chase Family Archive that Tim Chase gave me the other day. They were taken by his father Chester Chase, owner of the Clary Lake dam, during a heavy runoff event in June of 1984. We already had one picture in the archive from of that event but it was undated. These new photographs have the date “June 1984” written on the back in Chester’s characteristic hand writing.

These pictures show a significant runoff event. Checking the Weather Underground archives for 1984, it appears about 7.72″ of rain fell between May 26th and June 2nd that spring, which I reckon would be more than enough rain to account for the flow we’re seeing in these photographs. It is interesting to note that even with the water level this high, it is still over a foot below the official FEMA flood elevation for Clary Lake of 153.6′ which corresponds to the top of the concrete pier on top of the dam. This suggests that even this water level, as high as it was, was not considered a “flood” event in a technical sense.

There are a few other pictures in the Chase Family Archive showing extreme high water including an aerial photograph clearly showing water pouring over the dam and I would imagine that these are all taken about the same time.