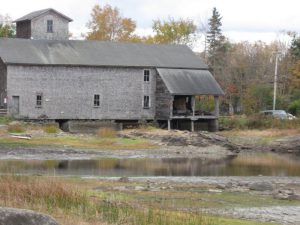 There is an article in the November 01, 2016 Central Maine Papers (Kennebec Journal, Morning Sentinel) about the Atlantic Salmon Federation (ASF) plans to play a role in the Branch Pond dam and mill site. Even after reading the article a couple of times I’m a little unclear exactly what the ASF intends to do at the site, but it appears they at the very least intend to build a fish ladder at the site and may be looking to purchase the dam and mill property outright or help with the removal and reconstruction of the mill building at another site. The dam and mill complex is currently owned by Stephen and Christine Coombs and is subject to a Department of  Environmental Protection (DEP) Water Level Order issued in June of 2014. According to the article, the DEP and the Maine Emergency Management Agency (MEMA) entered into a consent agreement with the Coombs’ last spring. The ASF got involved with Branch Pond this past summer as part of their Maine Headwaters Project.

Branch Pond is a beautiful little pond at the headwaters of the West Branch of the Sheepscot River. We host a few pages for the Branch Pond Association on this website. Here’s a link to the online article:

Here’s a link to a locally archived copy should the above link fail for any reason:

According to an article in today’s Kennebec Journal and Morning Sentinel by staff writer Madeline St. Amour, repairs have finally begun on the Branch Pond dam. Branch Pond and it’s dam are located in China and Palermo at the headwaters of the West Branch of the Sheepscot River and are subject to a water level order issued by the Maine Department of Environmental Protection in June 2014. The WLO was issued in response to a petition filed by the Branch Pond Association originally back in 2008. The petition was put on hold for 4 years to give the dam owners time to make repairs to the dam. No work was performed in that time however, and the petition process was restarted in 2012 about the same time as the Clary Lake water level petition was getting underway. I have remained in close contact with members of the Branch Pond Association over the past 4 years and I am pleased that DEP is now taking aggressive steps to enforce their Water Level Order, and happy for the Branch Pond lake shore owners who are finally seeing their efforts rewarded. Congratulations Branch Pond Association! Here’s the article:

I received a few phone calls this morning from Clary Lake shore owners who saw the article in this morning’s paper and wanted to know why DEP isn’t enforcing our Water Level Order with the same enthusiasm. This reaction is totally understandable. While there are many similarities between Branch Pond and Clary Lake, there are 2 very important differences. END_OF_DOCUMENT_TOKEN_TO_BE_REPLACED [dropcap]There[/dropcap] were two interesting articles about dams in the Central Maine Papers (Kennebec Journal, Morning Sentinel) this past weekend, one about the Clary Lake dam auction and another by staff writer Peter McGuire about the ongoing Branch Pond water level saga. There are a lot of similarities between the Branch Pond and Clary Lake situations: both petitions were quite contentious and neither Water Level Order has been implemented by the respective dam owners. Branch Pond received their Water Level Order back in June of 2013.

Branch pond is at the headwaters of the West Branch of the Sheepscot River, it’s a beautiful little pond half in China and half in Palermo (another similarity with Clary Lake). We host a few files for Branch Pond on our website.

Stephen and Christine Coombs, owners of Branch Mills Flower & Grain and the dam on Branch Pond have finally responded to the recently issued Branch Pond water level order. Their stance is angry and defiant: they declare the order to be illegal and therefore refuse the order in its entirety. They list a number of reasons for this decision, many of which we’re familiar with, having already heard them from Paul Kelley:

The document was originally sent to a long list of people including Commissioner Aho, and Governor LePage. One wonders if their appeal will resonate with our Governor or piss him off? END_OF_DOCUMENT_TOKEN_TO_BE_REPLACED

I went to the Branch Pond water level petition public hearing today and ended up spending most of the day there, and took a few pictures which I’ve uploaded to the Summer 2013 Album. I had not initially planned on staying too long but I had particularly wanted to hear Peter Newkirk of the Division of Environmental Assessment give his presentation and that turned out to be after lunch. He was there primarily to explain how he came up with the 1.7′ maximum annual fluctuation figure, and to defend it if necessary. No defense was necessary as nobody really questioned it. I was actually surprised there wasn’t more discussion about it. I finally left around 3 PM at which time the hearing was beginning to wind down.

I found the whole hearing interesting and I’m glad I went. It was particularly interesting to compare it with our own public hearing: this one started at 9 AM and was scheduled to run until 5 PM and be followed by a public comment period starting at 6 PM. Furthermore, all the testimony had been pre-filed, commented on, objected to, and ruled on DAYS BEFORE today’s hearing. Today was to allow the presentation of the testimony and evidence with opportunity for review and cross examination in real time. For comparison, our hearing started at 5 PM and ran for 5 1/2 hours and was over, and there were a number of people who didn’t get a chance to speak at all. I was even cut short in my testimony. Clearly, DEP learned a lot from the Clary Lake hearing process and have implemented improved procedures. Someone had to go first and I guess it might as well have been us paving the way.

Surprisingly, there were no representatives of the press there.

[UPDATE] OK, so there were representatives of the press there, Channel 13 News apparently sent a crew over likely late afternoon after I had left:

Branch Pond Water Level Petition goes to Public Hearing today, the hearing is at the China Elementary School in China on Route 9. The hearing starts at 9 AM and runs ALL DAY and into the night with the public-comments section starting at 6 PM. I’m going to attend it for a while this morning but I have some other responsibilities to attend to later in the day.

Things are heating up for the Branch Pond water level petition. As previously mentioned the hearing has been scheduled for August 23rd. It will be held in China, I believe at the China Elementary School. From what I’m hearing, DEP has made major changes to how they handle and process water level petitions compared to how they’ve run ours. For example, petitioners, interveners, and interested parties are all required to submit sworn and notarized pre-file testimony over a month before the actual hearing, followed by rebuttal comments. The actual public hearing sounds a quite different from what we went through, even a little perfunctory- an opportunity to review and discuss already-submitted comments and testimony. The following is an excerpt from an email I recently received from Brandon Kulik, Branch Pond Petition Spokesperson: END_OF_DOCUMENT_TOKEN_TO_BE_REPLACED

I received word from Brandon Kulik today that DEP has scheduled a public hearing on their water level petition for 23 August at a time and place to be announced. Brandon is  the Senior Fisheries Biologist at Kleinschmidt Associates and the petition spokesperson for the Branch Pond petition. Branch Pond is located at the head waters of the West Branch of the Sheepscot River, partly in the town of China and partly in Palermo. Both Clary Lake and Branch Pond are in the Sheepscot River watershed. It’s a beautiful little pond with a big dam owner problem. Margaret and I went up there last summer to visit with Brandon and his neighbor Mike Wozniak and talk about water level petitions.

The Clary Lake Association is sharing some space on our web server with the Branch Pond Association. I don’t really have the time to put much polish on their site but I have updated the home page with the 2013 dues notice. I’ve also added a “Branch Pond” post category to make it easier to pull out Branch Pond posts on this news page.