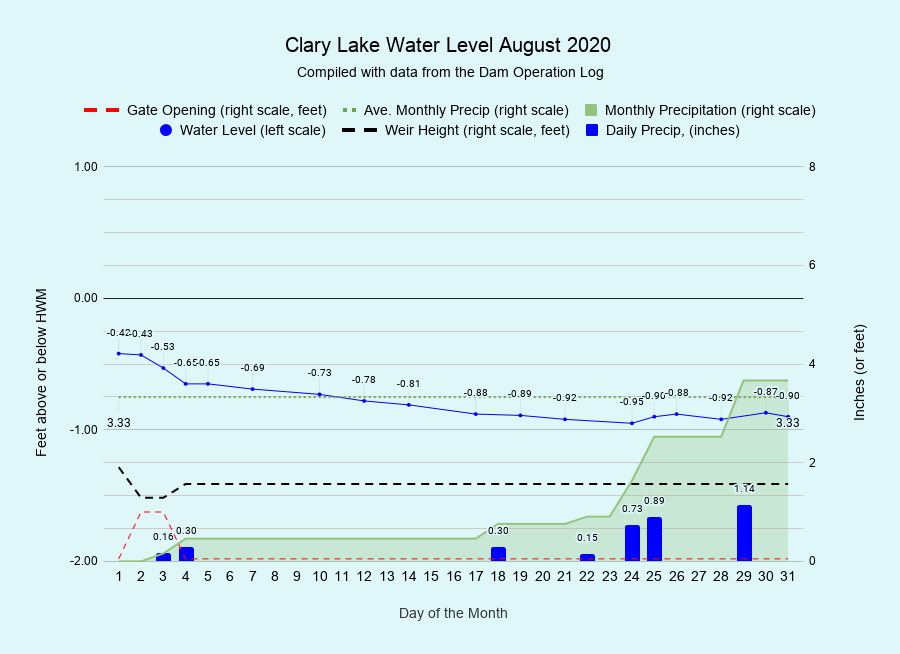 I have archived the August 2020 Water Level Chart (at left). August was characterized by extremely dry and and extremely hot weather which lead to considerable lake water loss due to evaporation. The anticipated influx of runoff from tropical storm Isaias at the beginning of the month never materialized, so our efforts to create a little headroom for storm water runoff only resulted in lowering the lake level two and a half inches, not that anyone noticed! From that level (-0.65 feet below the HWM) the lake level fell steadily at the rate of about 1/4 inch per day until a series of popup thunderstorms starting on August 24th brought some much needed rain to the area that helped keep the lake level from falling further. The lake ended up at -0.90 feet below the HWM. Historically, the water level in Clary would never have been this high in August.

While April rainfall was way above normal, we’ve been in moderate drought this summer due to hot weather and less than normal rainfall in May and June. As a result, we started August dry, but not that far below average rainfall. The first 3 weeks of August were dry and it was looking bleak until the 4th week of the month when we received enough rain to bring us back to normal. We’re now at 27.81 inches for the year which is 0.23 inches above normal. 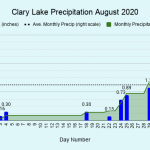 Water clarity this summer has been outstanding, and many people have commented to me about it. Our last secchi disk (transparency) measurement taken on August 16th was 4.72 meters (15.48 feet) which is rather unheard of this time of year. Two weeks earlier it was 4.20 meters (13.78 feet). I attribute this water clarity to the lack of rainfall and the resultant lack of runoff which is the primary way Phosphorus is introduced into lakes. We’ve seen this dry-weather phenomena for the last 4 years. Climate change seems to be manifesting in this part of Maine with warmer and wetter winters followed by hotter and drier summers.

Not all lakes have benefited from the dry summer the way Clary has. Damariscotta Lake has been in the news recently because of an algae bloom this summer, and decidedly green water was all-too-evident during my visits to Three Mile Pond in China and Pleasant Pond in Richmond last month. High water temperatures have been blamed for the Damariscotta Lake bloom, but I suspect the real culprit is high density lakeside development which can result in Phosphorus being introduced. High water temps haven’t caused a bloom in Clary this summer or in recent years. We are fortunate that Clary Lake is not heavily developed like many of the other lakes in the area. That said, despite our good water quality in recent years, Clary is considered at “high risk” for algae blooms by the Maine DEP.