I have archived the April 2019 Water Level Chart (at left). The most notable thing about this chart is that it shows the lake level rose up to the High Water Mark (HWM) on the first day of the month, for the first time since before our water level crisis started back in 2011! The lake level has been hovering right around the HWM for the entire month, spending some time above and some time below it, rising as high as 3 inches above the HWM on April 27th before dropping to end the month 1.80 inches above the HWM. A lake level slightly above the HWM is a more or less normal condition this time of year, and there has been water flowing over the top of the Clary Lake dam for the entire month. When the spring runoff ends (it’s already peaked), the lake level will drop back to a more reasonable level 4 to 6 inches below the HWM. The plan is try and keep it around that level through July and into August. Welcome to the New Normal.

We received 4.39 inches of rain in April, 0.61 inches above average for the month, but at a total of 12.08 inches so far, we’re behind the annual average of 12.21 inches for this date because precipitation for February and March was below average. That said, it appears ground water levels are just fine as we head towards Summer.

Several interesting lake events occurred in April. First, the ice went off the lake on April 14th this year which is the about median (middle) date for that event to occur. Most of you are already aware that happened 🙂 The other interesting event (which likely went unnoticed unless you’ve been keeping an eye on the Dam Operation Log) occurred on April 23rd. On that date, starting from the beginning of the year, all the water in Clary Lake was completely replaced (this was calculated by summing the daily outflow discharge which is tracked on the operation log). Clary Lake has a “flushing rate” of approximately 1.81 meaning that the whole volume of the lake (all 7223 acre-feet of it) is completely replaced by inflowing water approximately 1.81 times per year. That’s a lot of water!

About that Lake Level: 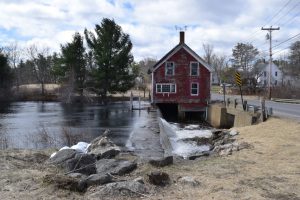 The WLO requires we raise the lake level up to the HWM in the Spring and maintain it “as close as practicable” to the HWM till the end of July. Well it turns out the elevation of the HWM as determined by DEP (151.17 feet NAVD88) is actually a little over 3 inches (0.28 feet) ABOVE the lowest spot on the top of the dam which is located a little to the right of the gate if you’re looking at the dam from the road. I suspected this was the case based on some quick elevation checks I’d done but it wasn’t confirmed until we started raising the lake level up to where it is supposed to be this time of year. Clearly, we can’t be expected to maintain the lake at the HWM for more than a short time in the Spring. This is not a problem: the WLO gives us the discretion to manage the lake level within a narrow range throughout the year. Our plan is to maintaining the lake level around 6 inches below the HWM through the Summer months. 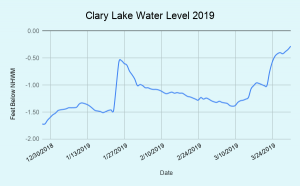 At the end of last month when I archived the March Water Level Chart I said I planned to stop producing these traditional water level charts, but I’ve been trudging down to the lake to measure the water level almost daily for over 7 years, and old habits are hard to break. I will continue to publish these monthly charts for a while longer. I am making new charts available based on data recorded on the Dam Operation Log. Once the data is added to the spreadsheet, the charts are produced and published automatically. You can view them on the Dam Operation Log or on the new Clary Dam Flow Statistics page.