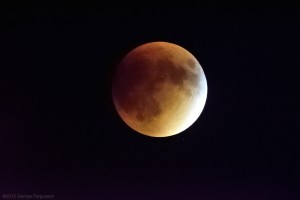 The September 27, 2015 Super Moon total lunar eclipse about 15 minutes before totality. Notice the 3 stars below the moon! Photographed by George Fergusson using a Nikon D3300 DSLR at the prime focus of a 6″ f/5 newtonian reflector at the Brower Observatory in Whitefield.

About 20 people including half a dozen children showed up at the Brower Observatory the last Sunday night to observe the Super Moon total lunar eclipse. There were a number of telescopes set up to observe the moon. The main function of a telescope is to collect light and usually bigger is better but since the moon is so bright, you don’t really need a big telescope to get good views of it. I set up my 6″ f/5 Newtonian reflector that I built back in 1975 and attached my Nikon D3300 DSLR camera at the prime focus and took a whole bunch of photographs, a few of which I’ve uploaded to the User Uploads gallery. The moon can be a challenging object to photograph because it’s very bright and usually lacks contrast. These came out nicely I thought:

David Hodsdon also uploaded a lovely picture he took of the moon as it rose across the lake from his home.

The Central Maine Astronomical Society (CMAS) holds star parties at the Brower Observatory every couple of months. Star parties are open to the general public and you need not own a telescope, all you really need to bring is your interest and imagination. CMAS also periodically hosts star parties at the Galaxy Quest Observatory in Lincolnville and at the Damariscotta River Association‘s headquarters at 110 Belvedere Road in Damariscotta. I‘ll post CMAS events at the Brower Observatory on our Events Calendar.