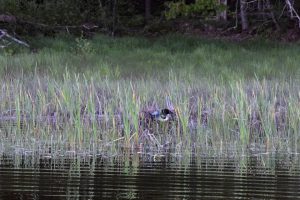 Margaret and I spotted this year’s loon nest yesterday evening, it’s located over on the southwest corner of Clary Lake not far from Route 126. I haven’t checked yet, but it’s undoubtedly visible from the road. This is the same place they tried to nest back in 2012, a nesting effort that failed when heavy rains caused the lake level to rise, flooding the nest (pictures in the Summer 2012 photo gallery). That year the loons attempted to nest a second time over on the north shore in the more traditional location (See News from 2012) but a falling water level resulted in that nest being abandoned as well. The loons didn’t even try to nest again until the summer of 2016.

Please give the nest a wide berth as much as possible. We’ll put the Loon Nesting signs out shortly, and I’ll try and get some better pictures.