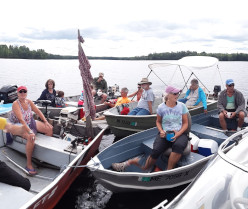 The CLA Coffee Clutch event was held last Saturday August 24th and we had a beautiful day for it. All told we had 7 boats and 6 kayaks show up carrying more than 30 people, all rafted together on Clary Lake, drinking coffee, eating donuts, and yakking up a storm. There was a stiff northerly wind so rather than anchoring out in the middle of the lake as originally planned, we moved the event closer to the north shore where we were a bit more sheltered from the wind. People who approached the flotilla from the south (which was almost everyone) had to battle high waves and a stiff headwind before arriving at the Coffee Clutch. Nobody had any trouble finding us- the sight of a few boats moored on the lake was hard to miss.

The Coffee Clutch was scheduled to run for two hours from 9 am to 11 am, and they passed quickly.

A number of people have sent me pictures of the event and I’m still processing them. I’ll add some more to the gallery as time permits. Here are a few to start:

I’d like to make a special shout out to Robin Chase of Chase Farm Bakery for donating 3 dozen of her fine donuts. Sugared, un-sugared, plain, molasses, whatever- they all got eaten. You simply can’t have a Coffee Clutch without donuts. Thank you Robin!

This first Coffee Clutch float (the brainchild of Margaret Fergusson) was such a blast that we’ve decided to make it an annual event! Next year we’ll try to hold it sometime in July when the weather is likely to be a little warmer and not quite so windy.