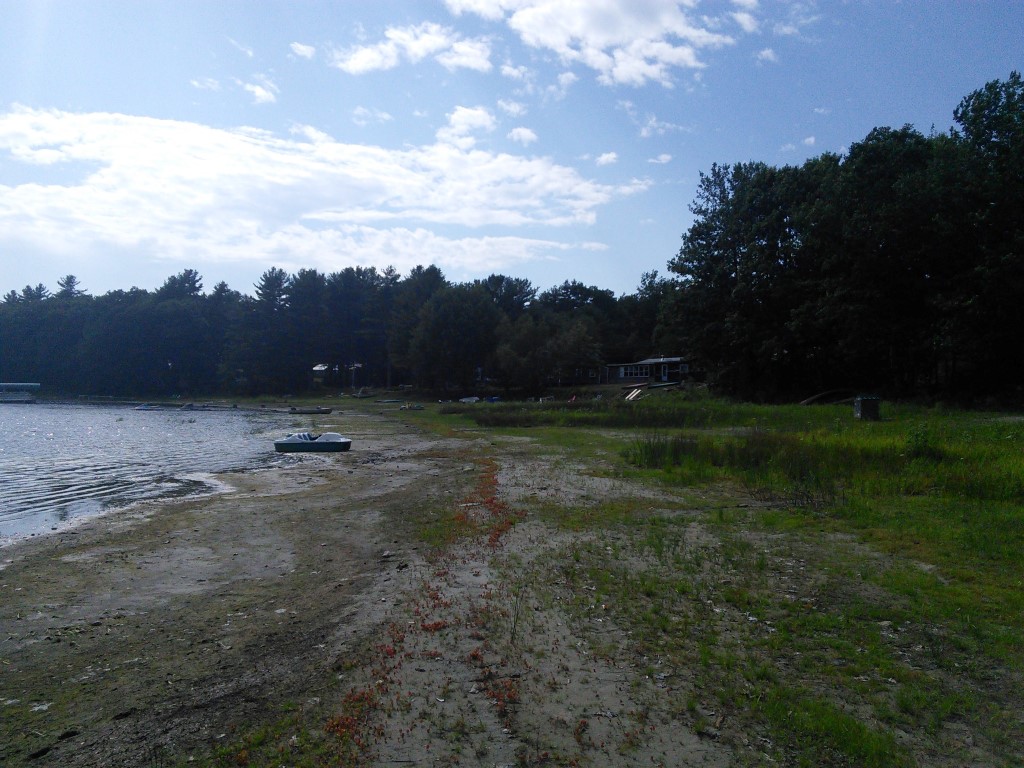 Duncan Road, north shore. The water level in this picture was 63″ below the top of the dam. Photograph by George Fergusson 28 July 2015

Everyone around the lake has been impacted by the Clary Lake water level crisis to some extent, some more than others depending on the nature of their shoreline. However, it is hard to believe the conditions the people over by Duncan Road on the north shore of the lake have been putting up with going on 4 years now. I had been over that way in my boat a few times earlier this year, but I never got too close to shore because of shallow water. I knew that the lake had receded quite a bit, but I really was not prepared for what I found today when I went over to look around. I drove over, parked, and walked around for almost an hour, taking pictures. It was a beautiful day, high summer in Maine, and not a soul to be seen. Nobody was there. No kids. No dogs. Nobody. And no wonder: it’s not a place anyone wants to hang out any more.

The panorama at left will give you an idea of what it’s like over there (large image, slow to open). Be sure to click on the Full Sized Image link and expand it to get the full effect. On that north shore, the water has receded more than 100′ from where it would normally be this time of year and the vast expanse of exposed lake bottom has turned into a field which people have been mowing, to control the weeds. To actually get out onto the lake you still have to slog through mud at the water’s edge and then contend with extremely shallow water extending far out into the lake, and large beds of elodea (pond weed) which just has to take all the fun out of going swimming (see “Lake shore owners concerned about invasive aquatic plants“).

I’ve uploaded a number of the photographs I took today to the Spring/Summer 2015 photo gallery. They’re all pretty depressing. The one at left shows a pile of rotting pond weed someone raked out of the water in an attempt to make the lake a little more inviting; I don’t know if it worked.