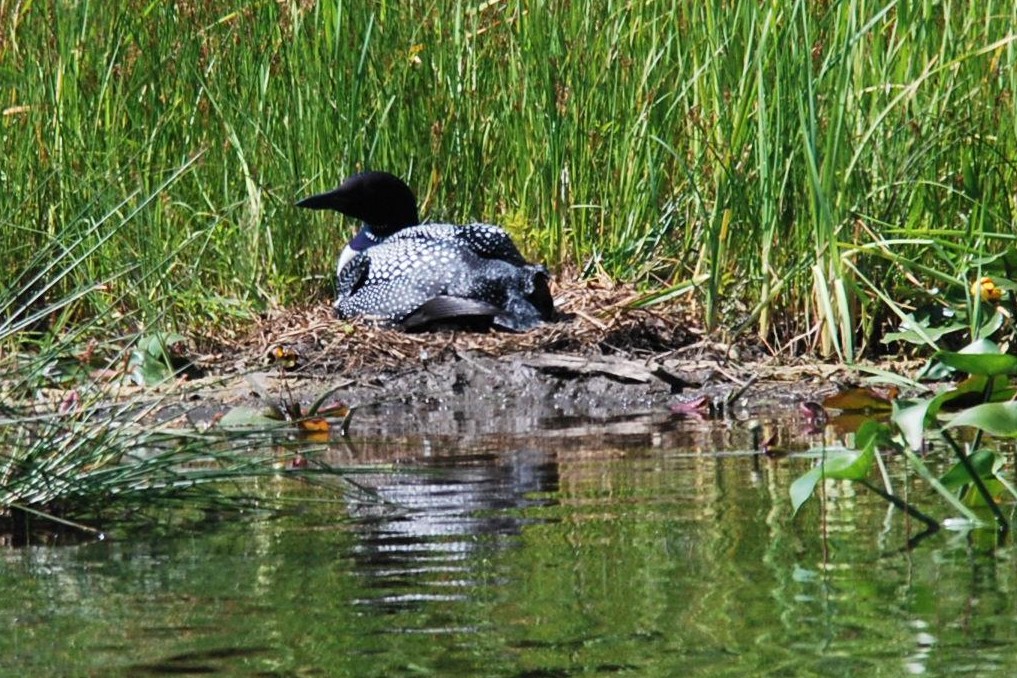 Arlene Wing has sent me some great pictures of the nesting loons and I’ve added them to the 2016 Loon Nest Gallery. She and her husband Randy own the former Crow property, that beautiful place located next to the State boat launch. Their house overlooks the cove where the loons are nesting this summer.  She and Randy can actually watch the nest from the comfort of their home. I stopped over there this morning for coffee and a visit, and they’ve got a spotting scope set up in the den. How cool is that!

Arlene just got a beautiful Nikor 300 mm zoom lens for her camera along with a 2X converter (I’m jealous!) and she’s now able to take excellent closeup pictures of the loons from a safe distance. After examining her camera setup this morning and taking a test picture, I had high expectations of some great pictures from her, and I’ve not been disappointed. She sent me an email with 7 or 8 pictures she took today (including the one at left), along with the following note:

Here are some loon pictures. I saw the change of the guard while watching through the spotting scope. Loons cannot walk because their legs are so far back on their bodies, so it is fascinating to see them push with their legs ad lurch on their chests. They sort of half stand like a penguin and launch themselves onto their chest. I saw one leave the nest, and the other one get on. It very carefully arranged the eggs and rolled them with its beak. The eggs are sort of a light olive green/tan color. There are two eggs. I read that they roll the eggs frequently to maintain an even temperature and they need to stay around 100 degrees to incubate. You will see one of the pictures where the bird has its beak open. I read that that is because it is needing to cool itself. The down positon is a defensive position when it feels threatened and is “lying low.” Still praying for chicks. Incubation is 26-28 days, and we don’t know how long the nest was there before we saw it, so could be any time now.

I can attest to the difficulty with which the loons climb up onto the nest, it’s definitely not “easy” for them in any sense of the word. Nonetheless they can manage if the distance from the water isn’t too great. Since the nest was discovered back on June 12th, the lake level has fallen 3.5″ which while making their lives more difficult, clearly hasn’t resulted in an insurmountable problem. Hopefully the eggs with hatch soon. I’ve received reports that loon chicks have been sighted on Long Pond in Somerville and on Damariscotta Lake. These eggs could hatch anytime.

Arlene told me that once or twice she’s scared off a Great Blue Heron that appeared to be stalking up on the nest. When I was over there last week a Heron flew low over the nest and landed further in the cove, and the loons were decidedly upset by it’s presence.

David Hodsdon also sent me the picture at left which shows one of the loons getting ready to climb back onto the nest and the eggs, which are visible in the background. Great picture David!

For now I’m sticking all the loon pictures into one Gallery. I might in time sort them into separate galleries depending on who took them. In any case, each picture includes the photographer in the caption so you can tell who took them.