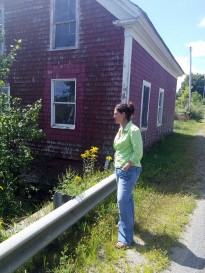 A story about tonight’s meeting at the Whitefield Fire & Rescue building on Townhouse Road has appeared in today’s Kennebec Journal. KJ staff writer Paul Koenig interviewed Representative Deb Sanderson and several other people for the article. Representative Sanderson conducted a site visit to Clary Lake several weeks ago to view the current low water conditions. I think it is safe to say that Representative Sanderson was appalled by what she saw that day, prompting her to call tonight’s meeting to solicit input from Clary Lake shore owners and town officials from Jefferson and Whitefield.

The meeting is to be held at 6:00 PM and the public is welcome. The meeting was scheduled on relatively short notice and we’re still trying to get the word out. If anyone has any questions, feel free to contact me.

The picture at upper left shows Representative Sanderson viewing the Clary Lake dam during her August 10th site visit. I’ll be posting some additional pictures from that visit shortly.