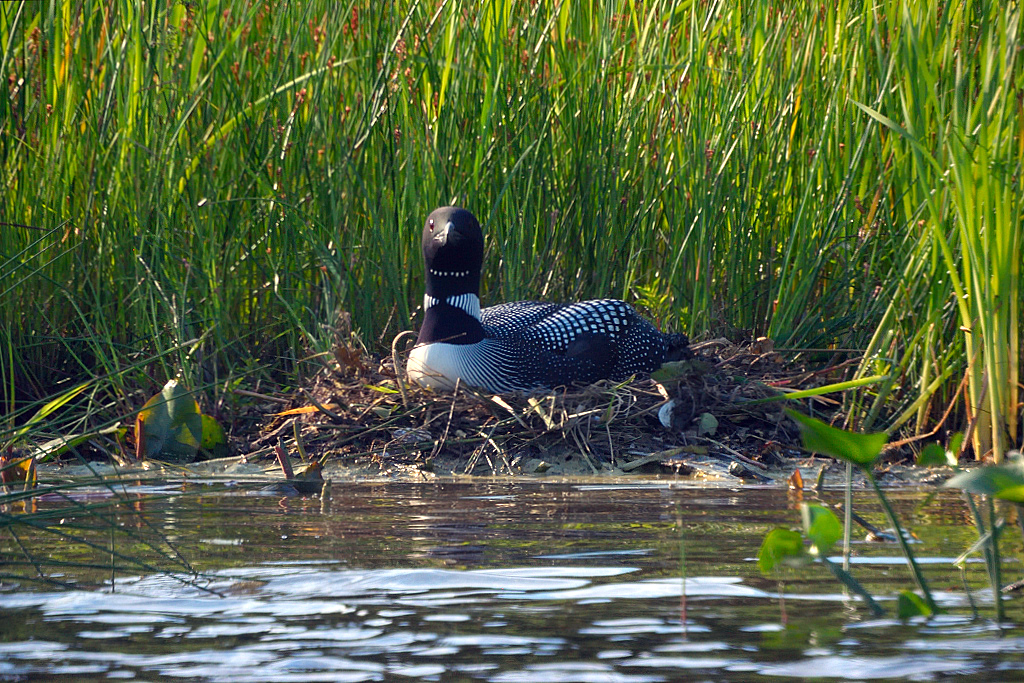 [dropcap]The[/dropcap] nesting Loons are doing fine and it appears that people are respecting the bird’s need for privacy and not venturing inside the LOON AREA signs. I stopped by today to try out my hastily-fabricated telephoto lens arrangement and took some pictures of the loons that came out rather well I think. Though it looks like I was right on top of them, I wasn’t. Not even close. From where I was set up on the lawn looking down on the nest, my range finder said I was about 390′ away from the nest. The loons barely took notice of me. The pictures were taken with a 6″ f/5 Newtonian reflector telescope which I normally use for observing stars, planets, comets, and nebulae. I hooked my digital Nikon D3300 camera up to it which gave me what amounted to a 762 mm focal length telephoto lens. By adding a 2x barlow lens I was able to double that to effectively a 1524 mm focal length telephoto lens.

When I first showed up today the female loon had just slipped off the nest into the water and I watched as both parents swam around the cove, fishing together, relating, and generally getting some exercise. They were a pleasure to watch as they cavorted around, diving and splashing. The water was quite shallow where they were swimming and you could at times see them underwater. I tried to get some pictures of that but they didn’t come out too well. Finally the female loon soon climbed back on the nest and took a few minutes to get settled down while the male loon took off across the lake. Loon’s legs are so far back on their body that they can’t walk on land so getting up onto the nest took a bit of doing, though quickly accomplished (picture at left). Watching it hop and scooch it’s way up onto the nest reminded me of a seal hauling itself out of the water onto the rocks.

In this picture you can see the tops of the 2 eggs in the nest as the female loon is rolling them over and arranging them before nestling down on top of them. The eggs are a light brown color and about the size of a goose egg i.e., about 4″ long.

Here’s a picture of the camera/telescope arrangement. As you can see, at 40″ long and 8″ in diameter, it’s not what you’d call portable or convenient to use. You’re not going to throw it over your shoulder and hike around with it, snapping pictures. You can’t hand-hold it, and a tripod to carry it steadily would be have to be huge and very heavy. I laid the scope on the ground on a blanket with pillows on either side to keep the scope from rolling around, and propped it up with a stick to get it pointed in the right direction. Really rather a pain to use. It’s a real light-bucket however and should take pretty good pictures in low light conditions. I may set it up some evening and see what I can shoot.

I’ve set up a 2016 Loon Nest Gallery and added all the photos we’ve got so far. You’ll find it listed on the Picture Albums page. Arlene Wing said she is getting a long lens for her camera and I’m looking forward to her pictures and her help in documenting the progress of this loon family as the summer progresses.