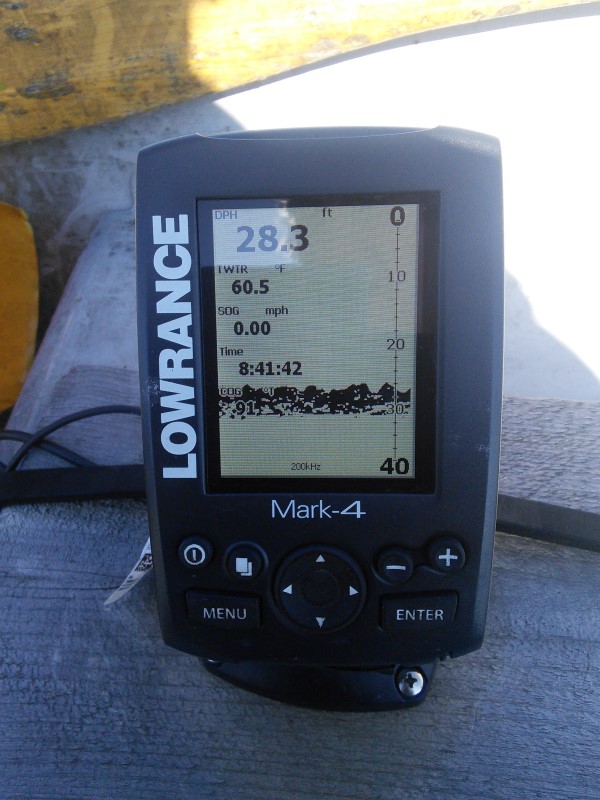 On Friday May 20th David Hodsdon and I (Jack Holland was not able to join us) were finally able to resume Clary Lake Water quality monitoring for 2016 albeit a month later than we had planned, but still within the allowable time frame. Better late than never as the saying goes. We had originally planned on starting a month ago, but our YSI Pro 20 digital dissolved oxygen meter which the Association purchased through donations a few years ago failed to pass routine calibration which is performed each spring by Maine VLMP technicians. They first thought the problem was a bad probe but swapping it out for a known-good probe didn’t solve the problem. YSI Technical Support suggested it might be water in the cable connector housing so they let the unit sit around disassembled for a few days to dry out. After that it started working intermittently. They ran some more tests on it over the next week finally certified it for use with the instructions to “keep an eye on it.” We got it back midweek last week.

This first time out, the DO meter worked flawlessly (and we hope it continues). With a secchi disk reading of 4.1 meters (13.25′) the water clarity is excellent, and about normal for this time of year. But be warned: it’s early in the season yet, and the water quality can and will deteriorate. The lake has yet to “stratify” meaning that it is pretty homogenous (well mixed) and there is no thermocline yet: the temperature from the surface to the bottom only varied 2.5° Celsius. This means that if you were to go swimming now you’d think the whole lake was cold, not just 6′ down like during the summer. Likewise, the dissolved oxygen reading only varied 2.6 mg/l from surface down to 7 meters.

We also took a core water sample to test for Phosphorus and have sent the sample off to the State lab for analysis and will post it on the Water Quality Data page when it’s available.

We try to collect our data in roughly the same place on the lake each time, over the deepest part of the lake, the so-called “deep hole” (Lat: N 44° 12.85′  Long: W 69° 33.15′). This time, with the lake level down 4.3′ below the top of the dam, I found a spot with a metered depth of 28.3′ (picture above) making the actual depth closer to 32′ to 33′ if the lake were full, a good 2′-3′ deeper than anyone had supposed (I have checked my depth meter with a tape and it is typically within 6″ of the actual depth). By the time I dropped anchor and came to a stop however we’d drifted perhaps 20′ or so and the actual measured depth was 7.6 meters (about 25′). This suggests the deepest “deep hole” of the lake isn’t much bigger than a dinner plate.