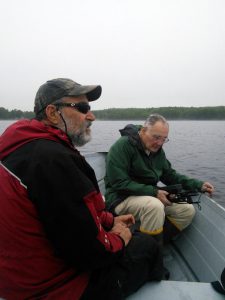 David Hodsdon and I concluded our water quality monitoring on Clary Lake for 2016 with our last data collection session this past Sunday morning. It was cold and windy. Roughly every 2 weeks since we started on May 20th, rain or shine, David and I (and Jack Holland when he could make it) have ventured out to the “deep hole” in my boat to collect water quality data including water transparency (secchi disk readings) and dissolved oxygen/temperature measurements. Three to four times a year we take a core sample of water for Phosphorus analysis. This information is periodically submitted to the Maine Volunteer Lake Monitor Program (VLMP) for review and analysis. We usually start collecting data in mid to late April, and my boat was ready to go this spring but our YSI Pro 20 Dissolved Oxygen Meter was in the shop for repairs and we didn’t get it back until mid May. Maine Volunteer Lake Monitor Program of which the Clary Lake Association is a longtime member wants water monitoring data collected during the boating season which is generally understood to extend from May through September. This year we collected data on 13 separate occasions.

Clary’s water quality held up pretty well this year in that we didn’t experience an algae bloom, this despite the lake volume having been severely reduced to around 55% of full as the result of severely low water levels- and we all know why that happened. Combined with alarmingly high mid-summer Phosphorus levels of 0.024 milligrams/liter on July 15th, we expected to see a severe algae bloom long about August, but water quality actually started to improve somewhat, primarily due to the lack of rain, and the resulting lack of runoff. That said, while we didn’t have an algae bloom per se, we did see prolific, almost explosive growth of the common pond weed

Elodea Nuttalli in most shallow water areas around the lake where there’s a muddy bottom (which included vast areas in the middle of the lake as this picture at left shows).  Hardest hit was the cove on the north side of the lake by Duncan Road, and the cove over on the west side of the lake by the Prescott camp, though really, it could be found growing almost everywhere the water was between 3 and 7 feet deep. The high phosphorus levels in the lake this summer undoubtedly contributed to the growth of this plant as did the low water levels (Elodea is a somewhat opportunistic plant that typically goes through boom/bust growth cycles). Phosphorus is the primary nutrient that is responsible for algae and general plant growth, and runoff from rain events is the main source of off-site phosphorus. Because of the drought, runoff was almost non-existent this summer. The lowest secchi disk reading we obtained this summer was 2.42 meters (7.94′) on August 12th. A secchi disk reading of 2 meters or less signifies an algae bloom in progress. You can find all the data for this and recent years on our Clary Lake Water Monitoring Data page.

Total Phosphorus in Clary Lake from 1975 through September 2015

There are other sources of Phosphorus besides runoff. As the chart at left shows, TP (Total Phosphorus) has been gradually rising over the years, likely corresponding to development around the lake and in the lake watershed. Phosphorus is also stored in bottom sediments and can be released into the water column under conditions of low oxygen as usually occurs in lakes like Clary when they become stratified (layered) in mid-summer. When you go swimming and the surface water is comfy but 6′ down it’s COLD, that’s stratified. In July for example, the water at the surface was saturated with oxygen but down at 7 meters (23′) the DO (Dissolved Oxygen) reading was only 0.2 milligrams/liter which is almost nonexistent. Under these conditions, Phosphorus will go into solution and if it manages to mix with the upper layers where the blue/green algae is living, it can spur its rapid growth. Such mixing of the water layers often takes place in the early fall which is why algae blooms in September and early October are not uncommon.

Phosphorus can also be released from sediment around the shoreline when disturbed by wave action. With the lake level so low this summer, sediment plumes from wave action have been very evident.