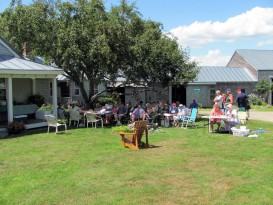 The 2015 Clary Lake Association Annual Meeting, one of our better-attended meetings in recent years. Not sure of the exact head count but I think close 50 people showed up. The weather was perfect. That’s Don Normam waving at the camera, Linda Gallion and the new treasurer-to-be Mary Gingrow-Shaw at the registration table counting money, and Butch Duncan standing next to Jeff French looking suspiciously at the camera. The meeting hadn’t actually started when I took this picture. Photograph by George Fergusson 01 August 2015

The Clary Lake Association’s 2015 Annual Meeting was held on Saturday August 1st. The meeting was well attended, the attendees were engaged and attentive, our business was efficiently and satisfactorily transacted, the weather was fantastic, and the pot luck supper afterwards was outstanding. What more could we ask for? For those of you who couldn’t make it to the meeting, here’s a summary of what went down.

First off, minutes of the 2014 annual meeting and April 1st, 2015 Special Membership meeting were presented and approved, and have been posted on the website. There were also 2 main articles on the agenda to be voted on. Article 1 (with 2 questions) involved a number of changes to the Association bylaws and article 2 was a resolution to rescind a motion that had been passed at the 2013 Annual meeting. Both articles passed by wide margins with only 1 or 2 dissenting votes. The newly-revised bylaws have already been posted on the website. Of special note are the changes to the Membership and Voting rights definitions: Membership in the Association, formerly limited to Clary Lake shore property owners only, is now open to anyone who shares the goals and purpose of the Association and pays annual dues. Any member in good standing may vote on any matter brought before the Association. We believe that going forward this “inclusive” membership definition will better serve the goals and purpose of the Association and it’s members. Speaking of members, a number of people who have not been members before (or have not been members for a long time) have decided to (re)join the Association. Welcome, and thank you.

Certificates of Appreciation were given to outgoing President Ellis Percy for his 4 years of service to the Association, and to Linda Gallion for her 10 years of service as Treasurer. Linda also received a very nice gift card, scant reward for her many years of valuable work for the Association. As her last official act in her position as outgoing Treasurer, Linda presented the treasurer’s report and proposed budget for the upcoming 2015/2016 membership year. A new slate of officers was elected as follows: Malcolm Burson for President, David Knight for Vice President, and Mary Gingrow-Shaw for Treasurer, all for 2 year terms, and Ellis Percy and Steve Relyea for Director positions, for 3 year terms. Finally, since nobody else wanted the job, George Fergusson was reelected to his second 2 year term as Secretary. As a the result of revisions to the Bylaws adopted earlier in the meeting, all Officers of the Corporation are now also Board members. For a full list of current Association officers, see the About page.

A quick note about our new treasurer: in recent years past, Mary Gingrow-Shaw and her husband Ernie could be seen most pleasant evenings during the summer taking a leisurely cruise around the lake in their 16′ 6″ Corson, taking in the sunset… except, sadly, this year, the first year I can remember, when low water conditions prevented them from launching their boat. Mary is currently the Deputy State Auditor for the State of Maine and is set to retire at the end of this year. She is without doubt horribly over-qualified for the position of treasurer of the Association and we’re very fortunate she is willing to take on this important role for us. On behalf of the membership, thank you Mary!

Mary Gingrow-Shaw gave a report on this year’s Annual Audubon Loon Count (only 1 loon counted) and Jack Holland gave a Lake Water Quality report (declining). I gave an update on the status of the ongoing Clary Lake water level crisis including a brief recap of the past year’s Board activities and summary of Mr. Kelley’s latest filing in Lincoln County Superior court (I’ll be posting a news article about this later today or tomorrow). There were a lot of questions from the assembled crowd and understandably a great deal of interest in this topic. The general outlook was decidedly UP BEAT and Optimistic in marked contrast to past meetings when it seems like anger and frustration were the prevailing emotions. Nobody is happy with the current situation obviously, but everyone expects a satisfactory outcome sooner rather than later and both supports and appreciates the efforts of the Association to make that outcome a reality.

Finally, two new initiatives were discussed. First, Association member Eleanor Goldberg spoke about her decision this summer to file a property tax abatement request with the town of Whitefield. She said she has been denied the use and enjoyment of her lake front and feels her property taxes should be reduced to reflect the lost value of her property. Everyone understood! She encouraged other Whitefield lake shore owners to consider joining her and filing their own property tax abatement requests, pointing out that there is strength in numbers. She also pointed out that this is not an Association initiative because all lake shore owners have been impacted, not just Clary Lake Association members. Ellis Percy said he is organizing a similar property tax abatement initiative for Jefferson lake shore owners and encouraged interested parties to speak with him or Eleanor after the meeting. Afterwards, Eleanor told me that a number of people had indicated their interest in joining the initiative.

As important as property tax relief is, there is a secondary and equally if not more important purpose of these tax abatement initiatives: to encourage the towns of Jefferson and Whitefield to take a more active role in support of the State’s defense of the Clary Lake water order. The specter of potential lost revenue should make it painfully clear to the Selectmen that this lake level crisis is not just a lake shore owner problem, but it’s the town’s problem too. It is anticipated that meetings with the Selectmen will include discussion of things the towns can do to support the State and influence the outcome of litigation.

While the Clary Lake Association takes no position on the property tax issue, we are interested in encouraging the towns to take a more active role in the lake level issue. To that end we’re going to do what we can to help these initiatives move forward by facilitating communication and organizing meetings. People interested in joining in either of these initiatives should send their contact information to the appropriate address:

I imagine each group will hold organizational meetings within the next few weeks. Stay tuned. If you don’t use email but want to be involved, contact me (George Fergusson) at 207-549-5991 and I’ll put you in touch with the appropriate people.

Second, newly elected President Malcolm Burson spoke about a proposed Clary Lake Association initiative to send a delegation of concerned Association members to meet with lawyers from the Attorney General’s office and representatives from the Department of Environmental Protection. The purpose of the meeting would be to express our disappointment with the pace of litigation and the lack of enforcement of the Clary Lake water level order, and to engage in constructive discussion with the State about ways the Association might be able to help move things along. Malcolm is going to lead this initiative and will be setting up an organizational meeting in a week or two with the aim of lining up a meeting with State officials towards the end of the month. Anyone interested in joining the delegation please contact Malcolm Burson or George Fergusson.

Minutes of the meeting will be posted as soon as they have been completed. Many thanks to everyone who helped make this a vibrant and productive Annual Meeting!