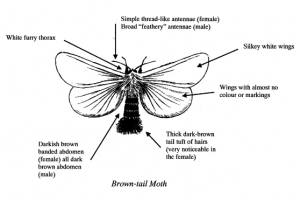 How to tell male from female Browntail Moths.

While killing Browntail moth caterpillars is easy and may make you feel better, it’s problematic for a variety of reasons. First, it gives you the sense that you’re doing something to rid yourself of the Browntail problem when in reality you’re probably not making a dent at all in the caterpillar population. If you just spray them with soapy water, sure it kills them, but then you’ve got dead caterpillars with their toxic hairs laying around your yard. I did that last month, fanatically wandering around my deck and yard with a spray bottle of soapy water in each hand, shooting caterpillars like some madcap wild west gunslinger. Of course, I got the rash on my arms and neck. Then I put aside the spray bottles and took up a tin can with some soapy water in it and kitchen tongs and went around picking the caterpillars up and dropping them in the can. More rash. Now that the caterpillars have begun pupating, I’ve been searching for the nests, cutting down those that I can reach with my tree pruner, and soaking them in a bucket of soapy water. Is this helping? I sure hope so, but I have my doubts.

The next phase in the Browntail Moth life cycle provides the next opportunity to thwart them: the pupating caterpillars will soon begin to emerge as male and female moths and seek each other out to have sex. What a great opportunity to interfere with their plans! Like many moths, Browntail moths are attracted to light so the obvious next step is to set up a trap using a bright light suspended over a container of soapy water to trap the moths.

I’m certainly not the first person to think of this idea. The following public Facebook post has been sent to me several times by different people and has been seen by thousands:

This 2019 article by a Camden man in The Free Press, an online newspaper serving Central Maine since 1985, describes a scheme to trap Browntail moths and cites the opinion of State entomologist Tom Schmeelk that the scheme will be largely ineffective:

Tom Schmeelk, the State entomologist in the video that I just posted (see: Browntail Moth Hell) doesn’t think this man’s scheme is an effective approach to controlling Browntail moths because he believes there is anecdotal evidence to suggest that it is mostly male Browntail moths that are attracted to light and that the female moths tend to “hang back” in the shadows waiting for a male moth to turn up and while a light trap may catch a lot of male moths, “it doesn’t take that many males to fertilize a whole bunch of females.”

So sometimes “anecdotal evidence” is right on the money and sometimes it ain’t and I’m not going to let anecdotal evidence of it’s possible ineffectiveness stop me from drowning as many Browntail moths as I can this summer. Initially I was going to set up a couple of 5 gallon buckets with soapy water in them with a lamp suspended over them. Then I found an old child’s wading pool stashed in the barn which should prove ideal. I will put 3-4 inches of soapy water in it and suspend a couple of bright lights over it. I’ll keep track of the percentage of male vs female moths I capture.

This slide from the video claims that Browntail moths emerge in July and that flight activity peaks between 10 PM and Midnight and that it is primarily males that are attracted to light: 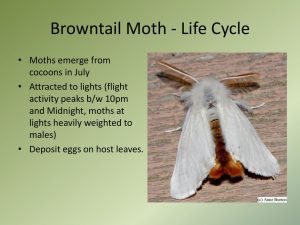 I’ve also been told that the moth’s life cycle is ahead of schedule due to  the dry warm weather we’ve been experiencing which means they might well start to emerge later this month. Be prepared. Get those moth traps ready!

Stay tuned. I’ll let everyone know when I first see Browntail moths and will provide updates on my trapping success. Trapping the moths can’t hurt, and it might help and at this point, I’m desperate.