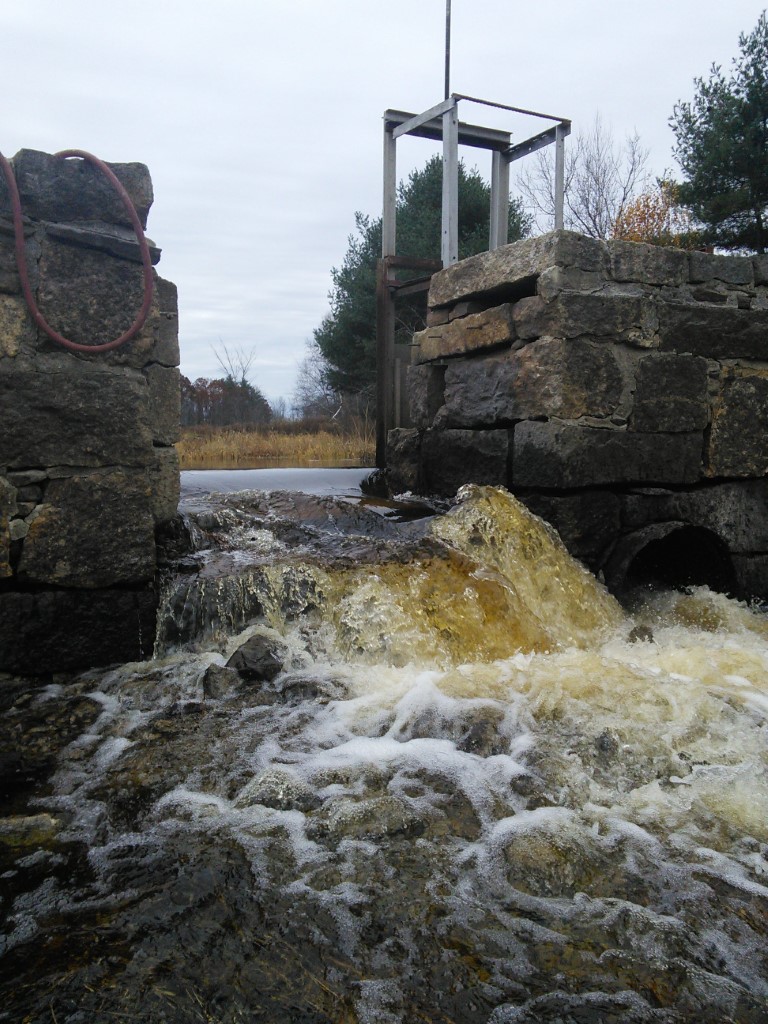 I’ve added another dozen or so pictures of day 4 of repairs to the Clary Lake dam. On Friday PCS finally finished demolition of the deteriorating concrete plug which was blocking the original log weir in the middle of the dam (picture at left). The crew proceeded to remove material cautiously, being careful to keep the demolition debris out of the stream. One big surprise was finding a layer of old wooden timbers laid on top of the bottom layer of rock and covered with concrete. These date back to around 1950. The wood was punky but still relatively solid, and came out in individual pieces roughly 6″ x 8″ x 36″ long. I have no idea why they were left in place.

There remain some slabs of concrete fascia pinned onto the northerly side of the weir that still need to be removed (picture at left); these were originally on both sides of the weir and formed the original stop log slots. Once the plug is completely removed, it will be

replaced with new reinforced concrete with a weir in the top to allow easy management of the water level. PCS will then resume removing the old mortar from the seams on the upstream side of the dam in preparation for sealing the seams against leaking with gunite.  The 4″ diameter Elm tree stump and it’s roots (visible in the picture at left) that was growing out of dam also needs to be dug out completely. That Paul Kelley let that tree (and a few others) to grow out of the dam unmolested for years is a testament to the lack of care and consideration he had for his valuable piece of property.

People continue to stop by to watch the work being done. I particularly like the picture at left showing CLA Member Albert Boynton talking with CLA treasurer Mary Gingrow-Shaw about the dam. Albert who I believe at 92 years you

ng is the oldest person in Whitefield, was in fact born in the little red house on the dam back in 1926; his father Chester Boynton owned and operated the Clary Mill back in the 1920’s and early 1930’s until the Great Depression arrived and they lost the property to the Bank.

You can see all the picture in the Fall 2018 picture gallery. I’ve got some video that I’ll post when I get a chance.