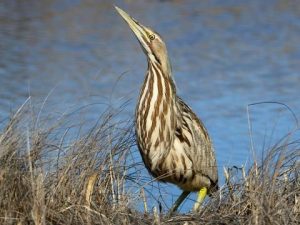 An American Bittern, one of the birds heard during the birding trip into the marsh. (stock photo).

Last Saturday, Steven Viti, Nancy DeWall, and myself, Malcolm Burson, took a two-hour paddle up into the Clary Lake marsh to see what birds were around. We started over on the floating bog where the blueberries grow where we got good looks at Eastern Kingbirds, Yellow Warblers, and Purple Finch, all of which are likely breeding there, and we heard a Veery singing. As we worked our way into the marsh, we heard a call with which I wasn’t familiar; later detective work led to the conclusion that this was a Marsh Wren, a species I hadn’t observed before at Clary. A zig-zag to the other side, beyond the island, produced a Swamp Sparrow, a regular breeding species here. We watched a Great Blue Heron fly across the north end, and once we headed that way, heard an American Bittern, possibly a return to breeding territory that I heard every evening last year closer to the main body of the lake.

As we paddled along, we also heard a Black-billed Cuckoo, and a Rose-breasted Grosbeak singing from the top of a tree. All together, we observed 31 species of birds (mostly by song / sound). At this time of year, these birds can be reasonably presumed to be in residence and on breeding territory.

Two days later, Eleanor Goldberg and I repeated the trip, and added a few other species, including Sora (a small secretive wading bird), a pair of Wood Ducks, an Alder Flycatcher, and this time, two bitterns. They also heard the Marsh Wren again, confirming that bird as a Clary Lake summer resident.

As the summer wears on, bird vocalizations go down, so if you want to try to find some of these avian friends, go soon!

[Malcolm Burson is a past President of the Clary Lake Association and a current Board member. He and Eleanor Goldberg own the last camp down at the end of Hornpout Lane over on the west shore of Clary Lake.]

Only admnistrator owned posts can execute the [includeme] shortcode. This message is shown only to administrators.