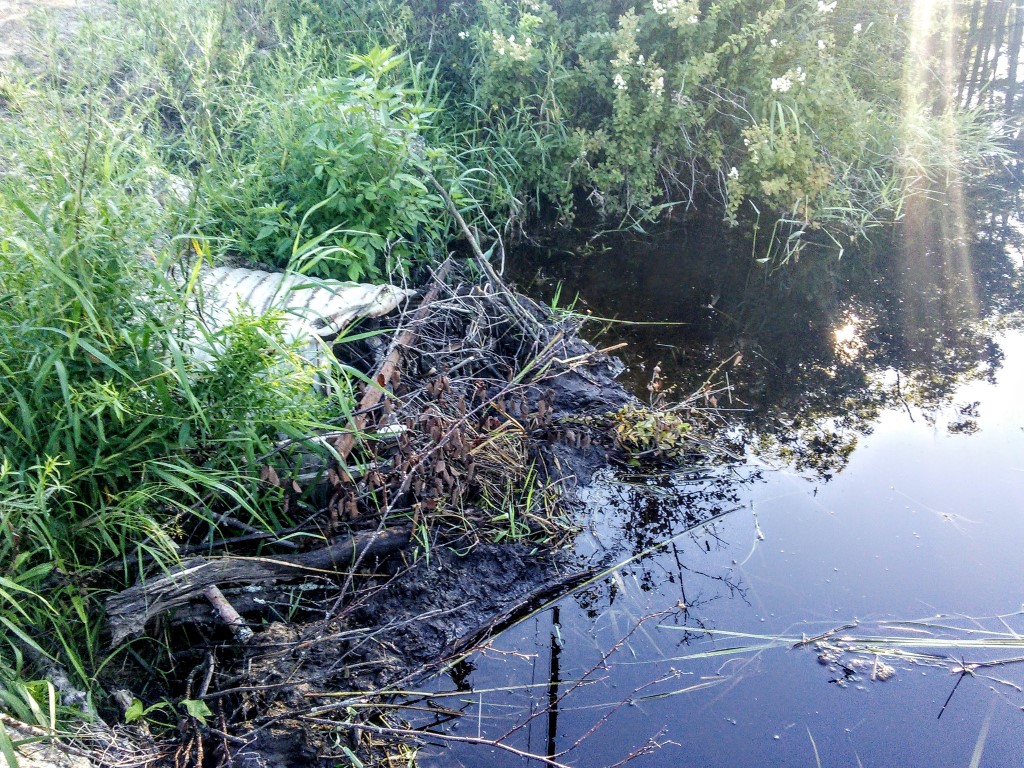 A funny thing happened over the weekend: the lake level which has been falling a consistent 1/4″ daily (due to evaporation only) had, without warning, risen 1/4″ by early Saturday afternoon without us having received any rain at all… This situation had me thinking I’d made a mistake in measuring the water level until I discovered early that evening that the marsh on the south side of Route 126/215 at the primary inlet to Clary Lake which had been recently flooded by beavers was draining into Clary Lake. The picture at left shows the inlet of the culvert well plugged by sticks and mud on Thursday afternoon with the water level less than a foot from the top of the culvert. Sometime early Saturday morning someone, most likely a Town of Jefferson work crew, brought an excavator to the site and dredged out the blockage.

The wetland on the south side of the road is about 15 acres in size and the beavers had backed up the water about 2.5′ deep which is roughly 38 acre feet of water (an acre foot of water is 1 acre, a foot deep) If you spread that 38 acre feet of water over 470 acres (the approximate size of the current basin of Clary Lake) you end up with a lake level rise on the order of about 0.08′ or almost 1″. Over that same 2-day period of time the lake lost 1/2 of an inch due to evaporation, which explains the 3/8″ rise I measured on Sunday. It all adds up; the numbers make perfect sense.

I had stopped by to take a few pictures to send to the Department of Inland Fisheries & Wildlife at the request of Clary Lake Association member John Ahern who owns the little gray house at the intersection of Route 215 and 126. John had asked the Association to to look into this flooding at the Annual Association meeting held the week before. Flow out of Three Corner Pond into Clary Lake through the culvert under the road was completely blocked. On Friday I sent a couple of pictures to a wildlife biologist with the IF&W.

I took the picture at left Sunday afternoon and you can see that the beavers have already started to dam up the culvert again. You can also see that whomever unplugged the culvert on Saturday failed to reinstall the steel grate. Instead, they left it lying on the side of the road. Perhaps they were thinking that the grate made it too easy for the beavers to plug the culvert? What they didn’t realize is that the beavers will happily stuff the culvert full of sticks and mud and this time, it won’t be so easy to unplug. Stay tuned for updates; something tells me this isn’t the end of the story.

I also received word this morning that IF&W is looking into the matter. If they decide to trap out the beaver, I can recommend a good place to let them loose…