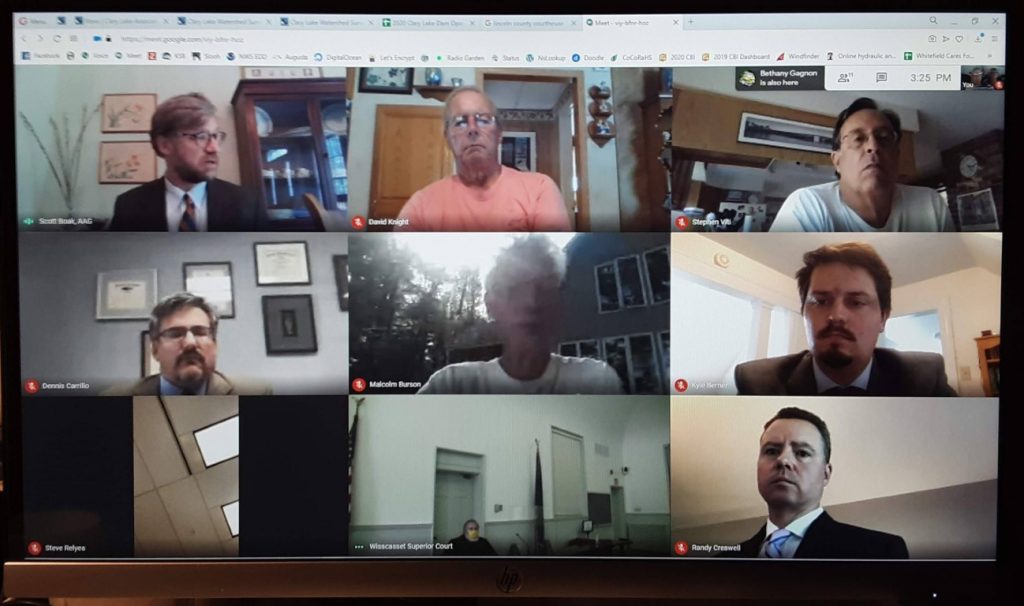 The hearing for oral arguments in the matter of Aquafortis Associates LLC (AQF) v. Board of Environmental Protection (docket AP-20-4) took place yesterday afternoon in Lincoln County Superior Court, Judge Daniel Billings presiding. The hearing was held using Google Meet (picture at left) and a few CLA board members including myself joined. I had planned on recording the hearing and making that recording available for viewing, but unlike Zoom meetings (with which I’m more familiar), recording is not an option with Google Meet. I did however take copious notes. Attorney for AQF Dennis Carrillo presented his case first, followed by Assistant Attorney General Scott Boak who represented the Board of Environmental Protection and finally, counsel for the Clary Lake Association Randy Creswell spoke. Judge Billings periodically asked questions. The hearing was scheduled to last 1 hour but it went considerably longer, about an hour and a half.

Since this is an ongoing appeal in which the Clary Lake Association is an interested party, I’m going to stick to the basic facts in my reporting of it and will leave my commentary for another time. If you’re interested in catching up on this case and/or reading the actual filings, this link will list all the posts (21 I think including this one) that I’ve written about the appeal going back to December 2018, in reverse chronological order:

In a nutshell, AQF has challenged our Right, Title, and Interest in the Clary Lake Dam by virtue of a pair of 2015 corrective deeds; they have accused the Clary Lake Association of trespass and of causing damage to AQF property; they have challenged our financial and technical ability to own, maintain, and operate the dam. Furthermore they feel they were denied due process when DEP declined to hold a public hearing on the Water Level Order Transfer Application. However, attorney Carrillo’s confusing and convoluted presentation of their case left me and I presume everyone else scratching our heads. Attorney Carrillo clearly had trouble articulating exactly how AQF would be harmed if the DEP Transfer Order were allowed to stand.

Attorney Creswell who represented the CLA in the 2018 bankruptcy proceedings mostly confined his remarks to the Right, Title and Interest aspects of the case. He concluded saying that this appeal was harassment, plain and simple. The Judge apparently agreed, commenting: “Mr. Creswell is correct. Sour grapes.”

The Court will take the matter under advisement and issue an Order in due course. I will post that Order when I get it.