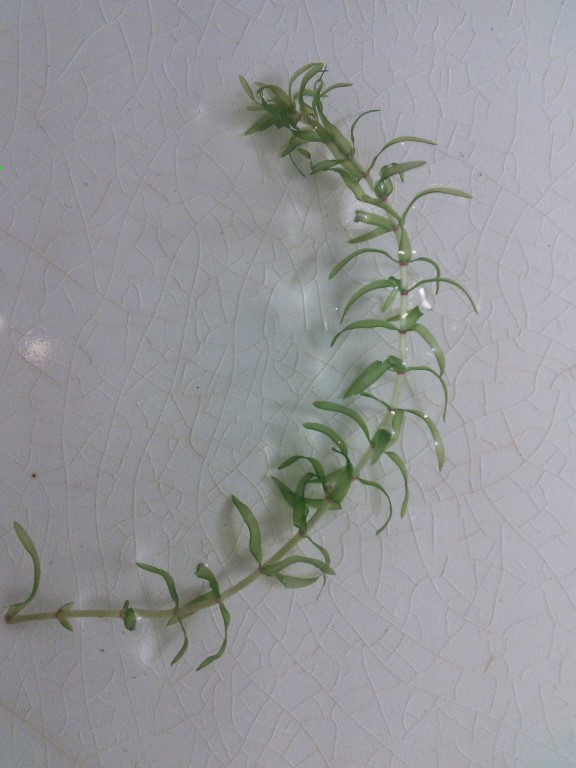 Last week I noticed some large and extensive mats of a green pond weed over by my shoreline in about 2′-3′ of water, thick enough to foul my trolling motor and bring my boat to a halt. I collected a sample and identified it as Elodea or American water weed (or Common Pond Weed). I was therefore not particularly surprised when Thomas Gillette showed up at my house yesterday with a shopping bag full of this plant, concerned that Clary Lake might have an invasive plant infestation underway. Thomas told me that Butch Duncan had brought it to him, saying that there were thick mats of it over in the cove on the north side of the lake by Duncan Road.

I reassured Thomas that this was not an invasive species. We’ve had this plant growing in Clary Lake forever but it’s always remained under control. You’d see a few pieces of it wash ashore from time to time or you might see patches of it up in the channel. Recently however, conditions around the lake have become quite conducive to this plant’s rapid growth in areas where it was not found before. Elodea is not a recognized invasive plant species but under the right conditions it can and does become a nuisance, clogging shallow water areas with thick mats of vegetation.  Elodea likes nutrient-rich water down to several meters (5′-7′) in depth, plenty of sunlight, water temperatures between 10° C and 25° C and a soft, silty or muddy bottom where it’s thin wiry roots can get a good foot hold. You won’t find Elodea on a rocky or gravel bottom. With the water level down 5′ and 50% of the volume of the lake gone, conditions around Clary Lake are near perfect for this plant’s growth to explode: the reduced lake volume increases the concentration of nutrients in the water and the lowered lake level allows sunlight to reach down to silty/muddy areas that would normally be under 7′ to 10′ of water where Elodea wouldn’t normally be found, or be able to survive. Now our shallow water areas are a perfect habitat for Elodea.

I took a boat ride over to the cove by Duncan Road after supper tonight to take a look for myself and it wasn’t hard to find. Most of the lake bottom in the cove out to a depth of about 3′-4′ was covered with Elodea. It looked about like the area I found the other day on my shore, but much much larger. I took the picture at left, but the light wasn’t very good, I had a hard time focusing and it didn’t come out that well. But you get the idea. I’ll bet that’s no fun to swim through. I’ll plan to do a more extensive survey of areas around the lake where Elodea has become established later this summer. If you happen to notice any on your frontage, please let me know.

While I’m confident of my identification of the plant is correct, I’m not an expert and Elodea is easily confused with an invasive plant with a real nasty reputation called Hydrilla. Therefore, out of an abundance of caution I have sent a sample of our plant to Roberta Hill, Invasive Plant Specialist with the Maine VLMP for a definitive identification. While I expect her to confirm my identification, I also just wanted to let her know that we’ve got an Elodea problem here in Clary Lake.

[UPDATE: 7-09-15] Based on the pictures I sent her and a sample of the plant that Malcolm Burson dropped off at the VLMP office this morning, Roberta Hill agrees it is an Elodea species but feels it it the variety Elodea Nuttallii and not Elodea canadensis as I initially suspected. She called me this afternoon and left a detailed phone message explaining that Elodea Nuttallii differs from Elodea canadensis in several very subtle ways and that they do hybridize frequently making it difficult to identify with certainty. A truly definitive identification would require DNA analysis (guess we won’t go there).

She also said that Elodea is notorious for having “boom and bust” cycles and that after “booming” for a few years it is likely to go into decline for a period of time before the next “boom” cycle. While this may be the case, it is small comfort; chances are that if the lake level were not 5′ below normal, the plant could “boom” all it wanted and nobody would notice because it was under 8′ to 10′ of water.

At the risk of sounding like an alarmist, I’ve been warning people that something like this was going to happen, it’s just taken a little while for the effect of severely lower water levels to manifest. And it’s just starting: if historical lake levels aren’t restored soon, conditions around the lake are going to deteriorate even further, and faster. Clary Lake is characterized as a eutrophic lake which means that under the best of conditions we’re going to experience water quality issues which, with care and consideration, we can manage, and live with. When the lake volume is reduced by lowering the water level, you change the whole ecological dynamic of the lake. Nutrient load is increased. Water temperature rises. Sunlight penetrates where it never did before. We’re going to start seeing lily pads and reeds in areas where you used to have clear water for swimming. Algae blooms, which we’ve been having for a few weeks in late summer or early fall for the past 4-5 years will occur sooner, last longer, and be more severe. Pretty soon algae blooms will be a permanent, nearly year-round feature. Fish species will die off. Wildlife will disappear. If you think your real estate values have been hurt by the low water level in Clary Lake, wait and see what they look like a couple of years from now.

This also seems like a good time to start an “Aquatic Plants found in Clary Lake” photo gallery. I’ve been meaning to do that for a while anyways.