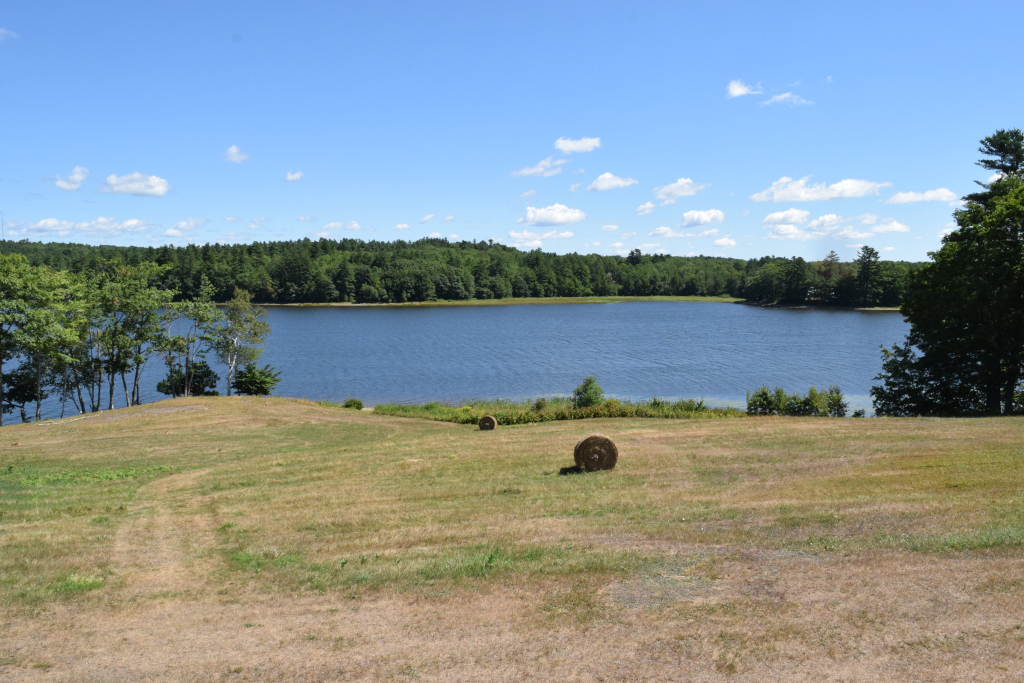 Around 35 people showed up last Saturday afternoon for the 2016 Annual Meeting of the Clary Lake Association held at the home of Erin Grimshaw and Christina Bishop on the south shore overlooking Clary Lake in Jefferson (picture at left). The venue was perfect but the weather was unsettled and VERY HOT. Storms were forecast. A brief rain shower shortly after the start of the meeting forced us to seek shelter inside and when we resumed the meeting outdoors, the air had cooled off nicely. It was a great meeting by all accounts. 19 people joined or renewed their membership before the start of the meeting which brought our total 2016/2017 membership count to 71. Not bad for the day of the meeting! Typically membership renewals continue to come in during the month of August. I’m confident that we’ll reach our goal of 100 members this year.

Senator Christopher Johnson kicked off the meeting by speaking briefly to the assembled crowd (pictured at left) in his usual quiet and unassuming manner, and to answer questions. Chris has been a stalwart supporter of the Association and our efforts to bring about a resolution of the Clary Lake water level crisis from the very start. We greatly appreciated his taking the time to stop by and meet with us.

The Membership voted 3 board members into office, Randy Wing for his first 3 year term, Jane Chase for her second, and Jack Holland for one year to complete the position vacated when Board member Cheryl Ayer resigned last spring. Our Contact page has been updated to reflect this. The Membership also approved 2 minor changes to the Association Bylaws proposed by the Bylaws Committee.

Perhaps the highlight of the meeting was President Malcolm Burson’s report on several meetings he has had recently with PretiFlaherty attorney Anthony Buxton, the purpose of which meetings was to receive updates on and discuss an initiative underway by the dam owner to make repairs to the Clary Lake dam. Now, we have known for some time that attorneys for the dam and mill owners have been trying to put together a proposal to repair the Clary Lake dam including raising funds for that purpose; information to this effect was part of an April 14, 2016 Superior Court filing by PretiFlaherty requesting a Stay of Court Action. I wrote about this back in late April (see: “20 April 2016: Lawyers for Kelley, Smith file Yet Another Motion For Stay of WLO Appeal“). An excerpt from that filing:

Aquafortis, Pleasant Pond Mill, LLC (“PPM”), and the DEP have been cooperatively working to resolve the issues that are the subject of Aquafortis’ appeal of the Department of Environmental Protection’s (“DEP”) Water Level Order for Clary Lake Dam (“CLD”), including issues that impede repairs to the CLD. fr. particular, AquaRortis and PPM have actively sought donations and/or financing for site repair, arranged for an eligible entity to receive potential tax benefits from donations, hosted a dam engineering consultant to assess site damage, and received a quote for the cost to repair CLD, as well as an additional quote for the cost to protect downstream properties by diverting water.

The initial deadline for submitting the proposal to DEP had been June 1st but as most of you will recall, no such proposal was provided on that date. Most people assumed that the initiative was dead. President Burson explained that in early June the Clary Lake Association Board authorized him to contact Attorney Buxton and request a meeting to find out the status of the initiative and to discuss the possibility of the Association helping with the costs of dam repair. A meeting was quickly schedule in late June and a follow up meeting scheduled for a month later, at the end of July. Based on those meetings President Burson told the membership that while there are no plans at this time to contribute to the repairs, he felt it advisable that we be in a position to offer to contribute in the future, depending on how the repair initiative proceeds. Any offer by the Association to contribute funds towards dam repairs would be subject to conditions and Membership approval of course. While the difficulties are great, we have reason to believe the the objective of dam repair in the near term- before the end of this calendar year- is still possible. President Burson asked for and received the Membership’s endorsement of his and the Board’s efforts to date, and their agreement that the Board continue these discussions going forward. Stay tuned.

ast on the agenda was New Business. Association member Erin Grimshaw talked about how the Association could work to develop a better sense of community around Clary Lake by sponsoring events that encouraged people to engage with the lake and with each other. She proposed the formation of a new committee she’d like to call the Momentum Committee. The idea came to her at this year’s Whitefield Fourth of July Parade when one of her boys suggested the Clary Lake Association should put a float in the parade next year. Needless to say the assembled membership thought this was a GREAT IDEA and promptly approved the formation of such a committee. As is usually the case when someone comes up with a good idea for a committee, they’re put in charge of it: President Malcolm Burson appointed Erin Chair. Expect to hear more about this exciting initiative very soon. If you have any ideas for community-based activities or want to get involved in the momentum committee please send an email to momentum@clarylake.org.

That wraps up this meeting summary. In the 10 years I’ve been involved with the Association, I can’t remember an Annual Meeting ending on such a high note as this one did. I have posted some photographs from the meeting in the Spring/Summer 2016 photo gallery and will post meeting minutes when they are ready. Many thanks to everyone who helped make this meeting such a success and to Erin Grimshaw, Christina Bishop, and their 3 boys for making their home available to us.