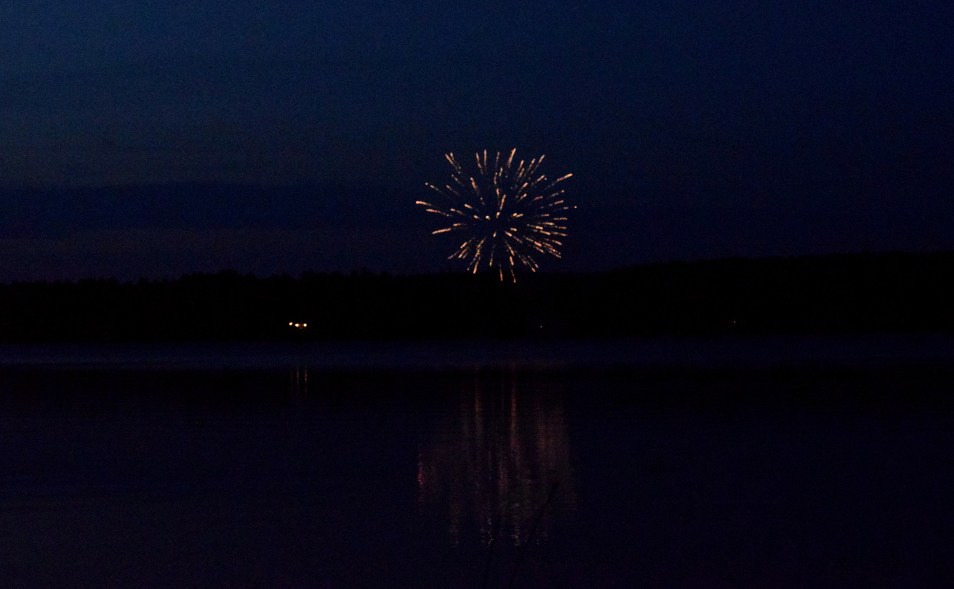 2016 Fourth of July fireworks. It appears the fireworks displays around the lake on Monday night did not disturb the nesting loons which were observed calmly nest-sitting the next day. Photograph by George Fergusson.

[dropcap]Like[/dropcap] a nervous parent, I have been checking the loon nest every day lately, and sometimes twice when I get the chance. This morning I observed one of the loons sitting on the nest but there is no evidence yet that the eggs have hatched. As near as we can tell the nest was established sometime around the 6th or 7th of June- at least that is when Randy and Arlene Wing first noticed the pair of loons hanging out around the nest site. Exactly when the nest was completed and the eggs laid is not clear but they were seen sitting on the nest by June 11th. That was 27 days ago. With a gestation period between 26 and 30 days, the eggs could hatch anytime.

Once the eggs hatch, the loon chicks will face a daunting gauntlet of challenges and natural hazards ranging from Snapping Turtles to Bald Eagles to competition for food from their own nest mate. More often than not, and for a variety of reasons, only 1 loon chick survives to become an adult. A friend of mine who has a camp on Damariscotta Lake related to me the other day that just last week he saw a Bald Eagle snatch a loon chick while the parents watch helplessly. How sad. Years ago I recall seeing a baby loon get taken by a Snapping Turtle. Life in the food chain is not pretty.

Fortunately, the lake level has only fallen a little over 5″ since the nest was established so getting onto and off of the nest hasn’t been unduly challenging for the loons. A bigger risk has been flooding. In that same period of time we’ve received 1.78″ of rain which under normal circumstances might have raised the lake level enough to flood the nest, but because it’s been so dry, all that rain only caused the lake to rise a total 0.36″. Again, fortunate for the loons.

Nervous-Nelly that I am, I had been a little concerned about the effect that this year’s fireworks displays were going to have on the the nesting loons. Would they freak out and abandon the nest? Fortunately it does not appear that they were unduly disturbed by all the noise: I stopped by Tuesday morning and observed one of the loons calmly sitting on the nest while the other was off fishing over by the boat launch. Loons don’t nest until they’re at least 7 years old so it’s more than likely they’ve seen and survived fireworks before. They probably thought it was just a bad thunder and lightning storm, without the rain.