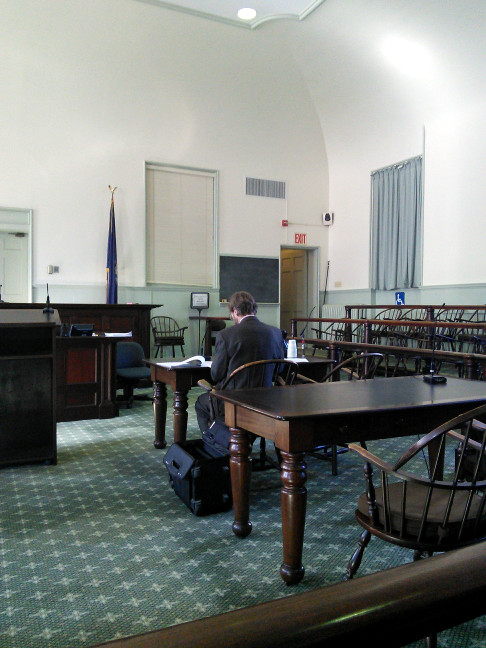 I attended the hearing for oral arguments on the Clary Lake water level order appeal yesterday in Lincoln County Superior Court (case AP 2014-1, Aquafortis Associates LLC [AQF] v. Maine Department of Environmental Protection [DEP or Department]). I was accompanied by my wife. In addition, Clary Lake Association President Malcolm Burson and Board member David Knight were there along with 3-4 people from DEP, a few people I did not know, and a couple of reporters. Paul Kelley and Richard Smith were also there. AQF was represented by attorneys Timothy D. Connolly and R. Benjamin Borowski; Attorney Anthony Buxton was NOT there; I don’t know if his decision to not show up is significant or not, but I was quite surprised by his absence. The State was represented by Assistant Attorney General Scott Boak. The purpose of the hearing was to give counsel for each side an opportunity to verbally present their case to the Judge. Their oral presentations closely followed their respective briefs (see:  10 October 2017: Aquafortis Files Rule 80C Brief, 16 November 2017: State files Response Brief, and 05 December 2017: Aquafortis Associates Replies to State Brief).  You’ll find a few more pictures from the hearing in the new Winter 2018 photo gallery.

The hearing lasted about an hour and a half. Attorney Connolly started out by reiterating the same tired old arguments that they have been harping on since the start of these proceedings: that DEP failed to establish a water level from evidence solicited at the hearing; that DEP lacked the authority to order repairs to the dam; that DEP lacks the authority over the Clary Lake dam because it’s a Mill Act dam; that the WLO represents an unauthorized taking; and that DEP acted in concert with the Clary Lake petitioners, denying AQF of due process. I did not think these arguments were particularly well articulated by attorney Connolly. Attorney Connolly spent quite a bit of time trying to discredit the water level elevation established by DEP and making a big deal out of the DEP’s performing a bathymetric survey after the August 2012 public hearing. He complained that they can’t figure out the “ring around the lake” and dragged out a chart of water levels presented by David Hodsdon at the August 2012 public hearing to illustrate the (obvious?) fact that the lake level fluctuates a lot and how did the DEP come up with 151.17′ being the “crest of the dam” as the normal high water mark?

Assistant Attorney General Scott Boak characterized the State’s case as “simple” and he proceeded, I thought, to quickly and successfully counter each of AQF’s arguments. He started out explaining that AQF has no explicit permit for the dam under either the Maine Mill Act and that AQF has not challenged the Department’s determination that the Clary Lake dam meets the definition of a dam under the Water Level Law. Furthermore he totally refuted AQF’s argument that the dam is breached and can no longer impound water by citing something Paul Kelley said to the effect that the hole impairs the ability of the dam to impound water, but it doesn’t destroy it. He also explained (I think to the judge’s satisfaction) that the bathymetric survey performed by DEP in the fall of 2012 had nothing to do with and wasn’t used in determining the elevation of the Historical Normal High Water Mark. He also explained that the 151.17′ elevation of the High Water Mark was established based upon a 2001 IF&W survey that Paul Kelley submitted to DEP to comply with Special Condition #4 of the WLO (the survey requirement). This was all spelled out in a June 7, 2016 letter DEP sent Mr. Kelley (see: 04 November 2016: DEP Establishes Clary Lake High Water Elevation).

All told the hearing lasted about an hour and a half. Next up, the Judge will issue a ruling on the WLO appeal. I have no idea when that will be but expect it will be sometime this spring. Stay tuned.