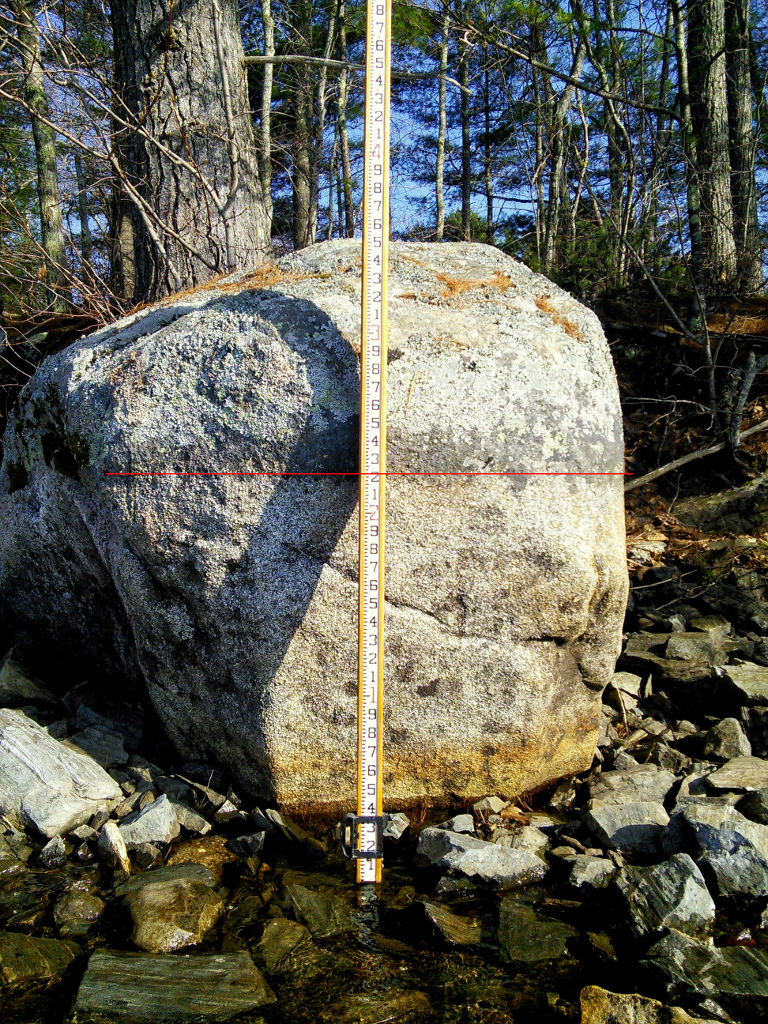 For the past 5 years I’ve been referencing Clary Lake water levels to the “top of the dam” for the simple reason that the actual elevation of the Normal High Water Line of Clary Lake has never been established. I knew from my own observations (picture at left) that the historical normal high water line has always been at or very near the top of the dam so it made sense to use the top of the dam both as a reference for my measurements, and as a proxy for the high water line. The picture at left shows a boulder with a distinct black stain showing the prolonged effect of the action water that corresponds to the approximate high water line of Clary Lake.

When the Clary Lake Water Level Order was issued back in late January 2014, the water level regime specified therein only referred to the “historical normal high water line” of Clary Lake without stating what the actual elevation of that line on the earth was. Special Condition #4 of the WLO required the dam owner to hire a Professional Land Surveyor to conduct an elevation survey whose job would be to establish the actual elevation of the Normal High Water Line of Clary Lake, which is defined as follows:

Normal High Water Line. “Normal high water line” means that line along the shore of a great pond, river, stream, brook or other non-tidal body of water which is apparent from visible markings, changes in the character of soils due to prolonged action of the water or from changes in vegetation and which distinguishes between predominantly aquatic and predominantly terrestrial land, 38 M. R.S. S.480-B (6)

The problem is, the dam owner didn’t comply with Special Condition #4 and in June 2014 the Department sent him a Letter of Warning for failing to provide a satisfactory survey.

Well, based on a June 7, 2016 letter from DEP’s Kathy Howatt to Paul Kelley that I just received a copy of, it appears he has finally submitted a satisfactory survey to DEP, and further, based on the Department’s careful review and analysis of that survey, they have established the elevation of the Normal High Water line of Clary Lake at 151.17′ (NAVD88)[note]NAVD88 stands for the North American Vertical Datum of 1988, the vertical control datum of orthometric height established for vertical control surveying in the United States. It replaces the earlier National Geodetic Vertical Datum of 1929 (NGVD29). All elevations used on this website unless otherwise noted are referenced to NAVD88.[/note]. I am 100% happy with this figure. This value is also coincidentally the same elevation for the normal high water line (and the top of the dam) that was arrived at by CES, Inc. in the course of conducting their October 2014 Elevation Survey for the Department.

Finally, this may all be ho-hum to most of you, but I can’t stress how big a deal it is that the Department has finally taken this step and established an actual elevation of the Normal High Water Line of Clary Lake. I have always been completely happy with the CES, Inc. survey and their elevation of the high water line but I chose not to adopt it as the elevation for the top of the dam because they only calculated it and didn’t actually measure it directly, whereas I did measure it, directly, on the dam. So as far as I’m concerned, until someone actually puts a level rod on top of the dam and shows me I’m wrong, I’m sticking with my value of 151.39′ NAVD88 for the top of dam elevation. However, now that the elevation of the normal high water line has been officially established, I am prepared to adopt it and in the near future will be revising my water level charts to reflect same, and will be providing water level elevations relative to the Normal High Water Line elevation. I can’t wait. I’ll make these changes retroactive to the beginning of November and will post an update explaining things when I’ve made the changes official.