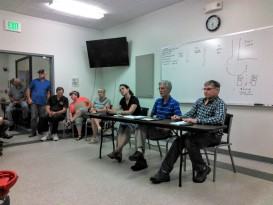 There is an article in this week’s Lincoln County News by staff writer Abigail Adams about the town hall meeting of lake shore owners, Whitefield town officials, and community members that was held last week, on Wednesday, the 26th of August. The meeting, originally conceived and organized by the Clary Lake Association, was held at the Whitefield Fire & Rescue building and was attended by over 60 people. The Kennebec Journal published an article in anticipation of the meeting (see: “Legislator to hear Clary Lake water level concerns at Whitefield meeting“) and I wrote about the meeting the next day (see: “Wednesday night meeting to air grievances about Clary Lake well attended“).

The primary purpose of the meeting was to provide Representative Sanderson and Senator Johnson with an opportunity to hear Clary Lake shore owner concerns and grievances. They will then jointly draft a letter to the DEP requesting equitable relief for Clary Lake shore owners (I’ll post a copy of that letter here when it becomes available). According to the article, Sanderson and Johnson also plan to meet with the dam owner to “hear Kelley’s concerns and hopefully negotiate a resolution.“

Representatives of the Clary Lake Association will be separately meeting with Jefferson and Whitefield Select Board members in the next few weeks to encourage them to play a more active role in supporting the State in their defense of the Clary Lake water level order.